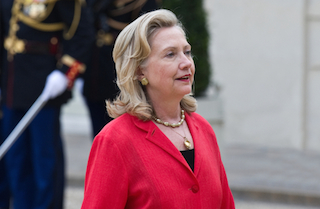 According to the Associated Press, the White House counsel’s office was unaware that then-Secretary of State Hillary Clinton used a personal email account to conduct State Department business.

The counsel was alerted to the existence of the personal account via the Benghazi Select Committee investigation, which discovered the account after subpoenaing about 300 of Clinton’s emails.

The person said Clinton’s exclusive reliance on personal email as the nation’s top diplomat was inconsistent with the guidance given to agencies that official business should be conducted on official email accounts. Once the State Department turned over some of her messages in connection with the Benghazi investigation after she left office, making it apparent she had not followed the guidance, the White House counsel’s office asked the department to ensure that her email records were properly archived, according to the person who spoke on a condition of anonymity without authorization to speak on the record.

The AP calls it “the first major test for how the White House and President Barack Obama’s administration will deal with Clinton’s likely 2016 presidential campaign,” noting that White House Press Secretary Josh Earnest has been made Clinton’s de facto defender.

Yesterday the Associated Press reported that Clinton had maintained the personal account on a private server, giving her extraordinary control over access to the emails, which federal required be archived with the State Department.