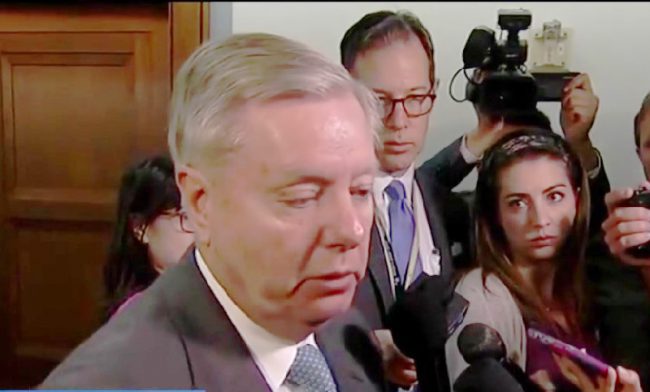 Trump sent off the following set of tweets Thursday morning, likely due to frustration over Morning Joe’s critical coverage of his presidency:

Now, we can cue the cycle that regularly follows an outrageous comment from Trump: a band of dignified Republicans distance themselves from the president’s comments — before eventually returning home to his warm embrace.

Sen. Lindsey Graham, Trump’s most reliable scourge on the right, kicked things off, calling the president’s tweet “beneath the office”:

Mr. President, your tweet was beneath the office and represents what is wrong with American politics, not the greatness of America.

This has to stop – we all have a job – 3 branches of gov’t and media. We don’t have to get along, but we must show respect and civility.

This is not okay. As a female in politics I am often criticized for my looks. We should be working to empower women. https://t.co/sV6WDE0EUD

MCCAIN on Trump’s Tweets this morning: “It’s hard to understand, and not presidential…”

Please just stop. This isn’t normal and it’s beneath the dignity of your office.

Mr. President, it is incumbent upon ALL of us to tone down this divisive political rhetoric. #RestoreCivility ➡️ https://t.co/Ky5nquKO2V

On the President’s tweets this morning → pic.twitter.com/tJJqsV8KCb

“It’s incumbent on all of us, then — from the President to Congress on down — to be responsible for our speech.” https://t.co/BVVKFll3Sj

I do not think making fun of a woman’s looks is acceptable. I get it every day of my life. I think that tweet is cruel – and unpresidential

I remember when Republicans were outraged if someone didn’t wear a tie in the Oval Office. Now the commander-in-chief tweets about facelifts

There’s no such thing as rock bottom pic.twitter.com/SiLCnEHCvI

Here is a list of all the important policy priorities Trump advanced today by attacking Mika Brzezinski’s bleeding face-lift:

You are a pig.