Republicans: Meet The One Leading Presidential Candidate Who Took Stand Against Individual Mandate 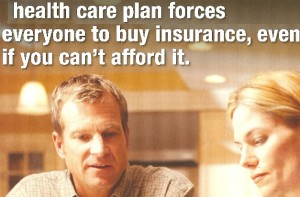 One of the major problems facing Republican presidential frontrunners Newt Gingrich and Mitt Romney is their longtime support for a national individual health insurance mandate, a major pillar of the dreaded Obamacare that conservative base voters hate so much. Romney passed an individual mandate as Massachusetts Governor, and expressed support for a national mandate. Gingrich, as Romney forced him to admit, all but thought the idea up. But there is one leading presidential candidate with a long record of opposition to mandating the purchase of health insurance.

I know, Republican voters must be thinking that this is too good to be true, and maybe it is. Let’s meet this anti-mandate candidate:

Yes, the one leading presidential candidate who consistently opposed the individual mandate is the guy who signed it into law. Then-Sen. Barack Obama didn’t just oppose the mandate, he ridiculed it, and used it to attack his primary opponent, then-Sen. Hillary Clinton. Once elected, President Obama was ostensibly pulled to that position by his party.

It is supremely ironic that Gingrich and Romney are trying to get elected by running away from a political position about which they were both 100% correct, while trying to beat the guy who was so completely wrong about that same issue. As Jay Carney pointed out earlier this year, Mitt Romney eloquently defended the individual mandate as a conservative idea:

“Not only have lower courts upheld (the law’s) constitutionality,” Carney began, “but the fact of the individual mandate being both constitutional and wise policy is an opinion shared across the ideological spectrum. A former governor of Massachusetts just said, the other day, ‘The idea for a health care plan in Massachusetts was not mine alone. The Heritage Foundation, a great conservative think tank, helped on that. I’m told Newt Gingrich, one of the very first people who came up with the idea of an individual mandate, did that years and years ago. It was seen as a conservative idea to say, you know what? People have a responsibility for caring for themselves if they can. We’ll help people who can’t care for themselves, but if you can care for yourself, you gotta take care of yourself and pay your own bills.’”

“That’s the former governor of Massachusetts describing the individual mandate, and why it’s smart policy, and we certainly agree.”

The individual mandate is only a hated liberal idea compared to the status quo. In the arena of health care reform, it is a desperate Hail Mary bulwark against a truly universal system like single-payer or Medicare for all. What Republicans ignore about that mandate is exactly what Hillary Clinton knew about it in 2008: it was absolutely key to preserving private insurance companies, while allowing for the prohibition of preexisting condition clauses. You can’t forbid insurance companies from denying coverage based on preexisting conditions unless everyone is required to have insurance.

I’m absolutely certain that candidate Obama knew this, too, but also knew that a mandate would be an easy to demagogue, political non-starter. He elected to sell the teaspoon of sugar, and let the medicine take care of itself later. While Hillary Clinton was absolutely right about the need for an individual mandate, Obama’s campaign against it proved that it would have derailed any candidate who proposed it. It’s fair to criticize his pivot to the mandate as President, but that criticism would mostly come from liberals like me, who would have much preferred a public option to an individual mandate.

This Robamaneycare issue may be good for riling up the conservative base, and the GOP nomination may just end up going to the guy who can best convince voters that he’s “come to Jesus” on the mandate, but it will be interesting to see them convince a general electorate that they’ll be better off if health insurance companies can deny them coverage for preexisting conditions. Even more amusing is that they will be campaigning against a President who never wanted that mandate to begin with.