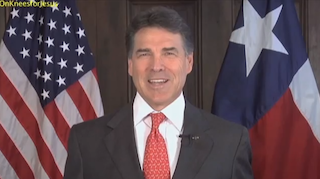 The country’s in trouble. A lot of trouble. Some people are throwing their hands in the air and giving up. Texas Gov. Rick Perry is clasping his hands together instead and asking God to fix all the problems we can’t (very different from giving up). A video of the Governor inviting Americans to join him at “The Response,” a daylong event filled with prayer and fasting has gone viral this morning. Some have been decrying the Governor’s endorsement for its blurring of the line between church and state. And there’s also another problem that’s been bubbling up about the event; “The Response” is being funded by an organization that’s been certified by some as a “hate group.”

If you’re unfamiliar with the ongoing story, the group in question is the American Family Association and, ever since the event was first announced, critics in Texas and nationwide have been pointing out that Perry is joining up with an organization the Southern Poverty Law Center has classified as an anti-gay hate group. For instance, I checked out the AFA’s homepage today and read the second most recent news story entitled “Libs: not smart to remind us of homosexual pedophile John Wayne Gacy.” Oh, it’s about Michele Bachmann. Cool. Lets see what it has to say:

“But here’s the pit into which the left has fallen, the one they tried to dig for Ms. Bachmann. They are going out of their way to remind us of John Wayne Gacy, who was a homicidal homosexual pedophile who raped and murdered 33 boys and young men, most of whom he buried in the crawl space of his house. The rest he dumped off a bridge into the Des Plaines River.

So liberals, by going out of their way to snarkily remind us of John Wayne Gacy, are inadvertently reminding us of the clear connection between homosexuality and pedophilia, which isn’t the smartest thing they’ve ever done.”

Yeah, I guess you could say that’s a liiiiiiittle bit anti-gay.

I’m sorry. Was that snarky?

Anyway, while Perry’s video is fun and he’s charming in it (“Be part of something even bigger than Texas!”), there are quite a few things unsettling about the event this United States governor and possible presidential candidate is shilling.

Watch the AFA’s video with Perry below: