Rick Perry, Death Dealer: The Poster Child For Why We Need Government Regulations 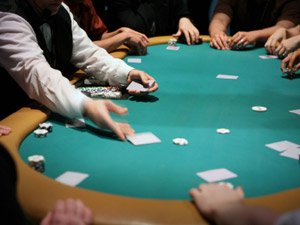 Republican frontrunner Gov. Rick Perry (R-TX) has been under a glaring media spotlight since entering the GOP field, and while it hasn’t been completely ignored, Perry’s life insurance scheme to open a futures market on dead Texas teachers deserves more attention than it’s getting. Even the liberals who have noted the ghoulish plan have failed to connect it to his new vision of the Civil Rights movement. Perry’s plan perfectly illustrates the need for what he calls “over-regulation,” but what the rest of us call “regulation.”

It’s sad, but not surprising, that Perry’s reputation as a Death Dealer has failed to get the traction it deserves. Much was made of George W. Bush‘s affinity for Texas’ death chamber as governor, and Perry’s record makes Bush look like the Susan Sarandon character from Dead Man Walking, but in both instances, there is a flaw in human nature that allows far too many people to accept the trade-off of revenge for a little bit of innocent blood. In some people, it’s even cause for admiration. As Politico reports, one participant in a focus group said, of Perry, “It takes balls to execute an innocent man.”

The quote is meant to shock, but the sad fact is, that kind of sick, id-fueled logic appeals to a lot of people, and it’s probably going to keep him from paying much of a political price over the life insurance scheme. I have to admit, as I read the details, the part of me that appreciates unfettered cinematic villainy was awed by the comical soullessness of the whole enterprise.

Here are the broad strokes, as reported by The Huffington Post’s Zach Carter and Jason Cherkis:

All they had to do was convince retirees to let UBS buy life insurance policies on them. When the retirees died, those policies would pay out benefits to Wall Street speculators, and the state, supposedly, would get paid for arranging the bets. The families of the deceased former teachers would get nothing.

Technically, they wouldn’t get “nothing,” as the article goes on to explain that reluctant retirees would be enticed into this arrangement with $50-$100 in extremely cold cash. The details only get more ghoulish from there, but as a former insurance consultant, the thing that leapt out at me was how such a thing could possibly be legal.

Even a layperson would have to wonder how an uninterested third party could take out life insurance on some random person. Surely, there’s something to prevent life insurance from becoming a back-alley dice game for anyone who can afford to bet on a stranger’s death. As a matter of fact, there is: state regulations. In this case, “insurable interest” regulations, which are foundational to the entire life insurance industry: (emphasis mine)

“Insurable interest” is a key principle in life insurance law. It is the requirement imposed by law (and by insurers) to prevent a “gaming” or “wagering” by one party on the life of another through insurance. Simply put, to insure the life of an individual, the applicant must have an insurable interest, i.e., a greater concern in the insured’s living than dying. Courts (and insurers) look for “a reasonable ground … to expect some benefit or advantage from the continuance of the [insured].” Stated in another manner, the public has an interest in preventing the contract of insurance where the applicant has no interest in the continuation of the insured’s life other than the prospect of profiting from the insured’s early demise.

This is what prevents your neighbor from eyeing a big payday when he sees you out back, grilling bacon-basted ribs.

Insurable interest regulations vary from state to state, which has, in the past, permitted some Perry-esque twisting of the concept, such as the 90’s Wal-Mart case, where the company was secretly taking out policies on even its low-level employees, and pocketing the proceeds of their deaths. The worst of the so-called “Dead Peasants Insurance” was done away with by federal regulations that require companies to disclose to, and get consent from, any employee it attempts to insure. The new federal regs also restrict such policies to those in the top 35% of earners at a company, in keeping with the original intent of such “key employee” policies.

As ghoulish as it was, at least Wal-Mart had a fig-leaf of insurable interest, in that they could actually point to costs associated with the loss of an employee, even if they didn’t amount to what the policies paid out. In the case of the Texas life insurance scheme, the holders of these policies would have no concern in the insured’s living, and every interest in their dying.

The Huffington Post article goes on to explain that the Texas scheme was dependent on Texas’ insurance commissioner waiving insurable interest regulations. This is what Perry is talking about when he compares the struggles of corporations with the Civil Rights movement: your freedom to have your death become a casino game for Swiss bankers.

This is what Mitt Romney means when he says “corporations are people,” that their right to gamble on your life is equal to your right to live that life.

This is what Michele Bachmann means when she says that “slavery is horrible, and economic slavery is horrible, too,” that corporations must submit to the cruel whip of regulations that prevent them from turning you and your family into so many dice, or doing anything else they want to do.

We’ve all had experience with a regulation that we thought was stupid, or a stack of forms that we don’t see a purpose for, and that makes it easy for Republicans to demonize them. If the Republicans said they were against “excessive criminal laws,” they wouldn’t get this kind of traction, yet the consequences of “under-regulation” are often more dire than that.