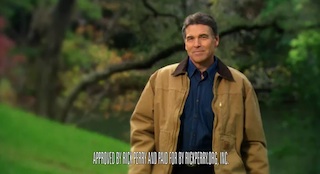 Yesterday, after the White House issued a memorandum pledging to “promote and protect the human rights of LGBT persons” abroad, Gov. Rick Perry hit back, helpfully reminding everyone that “special rights for gays in foreign countries is not in America’s interests and not worth a dime of taxpayers’ money.” Well, did you know that America is wasting its dimes helping gay people here at home as well? It’s doing so by helping gay people here help other people overseas all at the expense of our nation’s children.

Confused? Well, Perry explains it in a new ad released yesterday in which he informs voters that “there’s something wrong in this country when gays can serve openly in the military but our kids can’t openly celebrate Christmas or pray in school.”

Thank God (the Christian one, thank you very much!) that Perry is around to make that comparison because, as we all know, those two things are completely identical.

Seriously, do you know how horrible it is for America’s Christian children today who have to keep their love of Christmas a secret? They can absolutely never mention it in school, able only to hint at it by wearing “festive” colors (red and green being the recognized sign that one is cruising for gifts). These kids are forced to pretend to be “normal” holiday celebrators. But they don’t want to wish people “Happy holidays.” That’s a lie! It’s not who they are!

And the media doesn’t help! Our media wants to pretend that these kids don’t even exist! That’s why, according to TV Eyes, in the past month, the word “Christmas” has only been mentioned on 345,926 times! You can’t hide these kids under a rug, America!

To make things worse, as we all know, letting Americans serve in the military in an open and truthful fashion directly impedes children from celebrating Christmas. I’m not sure how it does that. It just does.

So God bless (again, the real God, not one of those stupid ones) you, Rick Perry. Thank you for protecting honest Americans from those other honest Americans who want to protect us honestly. You truly are a hero.