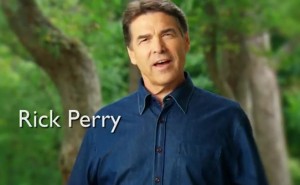 There’s a lot wrong with Rick Perry‘s newest campaign ad, starting with the fact that he’s getting way ahead of himself by targeting Barack Obama, when he still has to climb over Mitt Romney and four or five others. The ad, entitled “Lazy,” twists the President’s words out of context, and resurrects the “socialist” accusation that plays well with the conservative fringe, but not so well with ordinary Americans.

When the Republican presidential campaign first began, there was a Kum Ba Yah feeling among the candidates, who tried to obey Ronald Reagan’s 11th Commandment during early debates, and focus most of their fire on President Obama. That truce fell apart like a game of alcoholic Jenga, and soon, the GOP hopefuls were trading vicious body blows.

After a bruising couple of months fighting his Republican rivals, and his own cerebellum, Perry finds himself mired on the bottom rung of the second tier, hanging in there like a kitten on a motivational poster. What better time than that to shoot past his opponents, and hit President Obama with that old reliable “socialist” tag, the Freebird of anti-Obama attacks?

The ad, entitled “Lazy,” opens with an out-of-context quote from President Obama, telling leaders at the APEC summit, “We’ve been a little bit lazy, I think, over the last couple of decades.”

Perry then dissolves in to distort (a generous assessment) what the President said, saying, “Can you believe that?  That’s what our President thinks is wrong with America? That Americans are lazy?”

Even in that abbreviated clip, the President is obviously not saying that “Americans are lazy.” Here’s what the President said, in context:(Transcript of REMARKS BY PRESIDENT OBAMA AT APEC CEO BUSINESS SUMMIT Q&A, November 12, 2011, via email from The White House)

MR. McNERNEY: I think one related question, looking at the world from the Chinese side, is what they would characterize as impediments to investment in the United States. And so that discussion I’m sure will be part of whatever dialogue you have. And so how are you thinking about that?

PRESIDENT OBAMA: Well, this is an issue, generally. I think it’s important to remember that the United States is still the largest recipient of foreign investment in the world. And there are a lot of things that make foreign investors see the U.S. as a great opportunity — our stability, our openness, our innovative free market culture.

But we’ve been a little bit lazy, I think, over the last couple of decades. We’ve kind of taken for granted — well, people will want to come here and we aren’t out there hungry, selling America and trying to attract new business into America. And so one of things that my administration has done is set up something called SelectUSA that organizes all the government agencies to work with state and local governments where they’re seeking assistance from us, to go out there and make it easier for foreign investors to build a plant in the United States and put outstanding U.S. workers back to work in the United States of America.

Maybe it’s just me, but I think most Americans probably fall pretty low on the Global Promotion of US Commerce flow chart.

Finally, Perry delivers the closing jab (if only he could get multiple takes at debates), “”Obama’s socialist policies are bankrupting America. We must stop him now.”

The “socialism” charge is tired, and doesn’t resonate with anyone beyond the conservative Tea Party base, but it’s particularly jarring here, coming as it does after a quote from the President promoting US business interests around the world. Plus, Perry really ought to be concentrating on the “socialist” standing between him and Barack Obama, the one in his own party.