Rick Perry’s Wife: My Husband Is ‘Being Brutalized’ By Opponents ‘Because Of His Faith’
video

Rick Perry’s Wife: My Husband Is ‘Being Brutalized’ By Opponents ‘Because Of His Faith’ 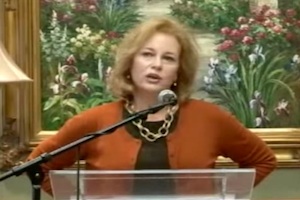 Rick Perry‘s wife Anita Perry addressed supporters at North Greenville University yesterday and slammed the treatment of her husband by the press and the GOP. “We are being brutalized by our opponents in our own party,” Perry lamented. “So much of that is, I think they look at him because of his faith.”

“After Rick had won being elected for the governorship for the third time in Texas, there was a nagging, a pulling at my heart for him to run for president,” Perry said. “You know what we have no leadership in Washington. We have nobody to guide our country. (…) God was already speaking to me, but he didn’t want to hear it… He felt like he needed to see the burning bush. I said, ‘Look, let me tell you something. You may not see that burning bush but there are people who see that burning bush for you.”

“So he truly felt like he was called to do this,” Perry explained. “We still feel called to do this. We are being brutalized by our opponents in our own party. So much of that is, I think they look at him because of his faith.”

Perry addressed his wife’s comments this morning on Good Morning America in an interview with George Stephanonopoulos. “I’ll tell you for sure that family members generally take these campaigns harder than anyone else, but I’ll stand by my wife. I think she’s right on both cases.”

RELATED: Bill O’Reilly On Christian Candidates And The Secular Press: It Drives Them Crazy

Bill O’Reilly agreed with Perry’s wife last night and said anyone of faith would be “raked over the coals” by the “secular press.”