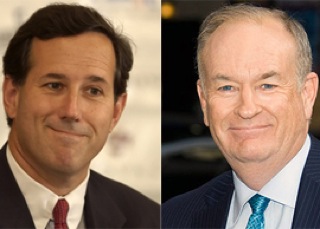 With the Iowa caucus 24 hours away and the tension mounting on the three campaigns still vying for a clear lead, potential frontrunner Rick Santorum has started lashing out at the media– both conservative and liberal. On the radio today with host Mike Gallagher, Santorum accused the “elite media” of having a “general attitude” that they know better than voters so pervasive that it even appeared in Fox News, and accused Bill O’Reilly of “refus[ing] to put me on his program.”

RELATED: Rick Santorum Says He Only Endorsed Mitt Romney In 2008 Because He Didn’t Like John McCain

Santorum noted that the pundits coming to Iowa “don’t even talk to the candidates” and base their judgments on preconceived notions, advising voters to not “defer your judgment to pundits who know less about these candidates than you do.” “I’ve seen the media just completely try to shape this race,” he continued, adding that it occurred not only with the liberal media, but “even Fox News. You know, Bill O’Reilly has refused to put me on his program,” he told Gallagher. “I’m just not– as far as he was concerned, I wasn’t a worthy enough candidate to earn a spot to sit across from him and be on his program.” He also laughed at the idea of “folks supposedly in the conservative media who are saying ‘we’re going to choose who we think are going to win’ and then complain the mainstream media does the same thing.”

Fighting the media took Newt Gingrich‘s numbers to levels no one could have predicted after his first staff exodus, and it could perhaps make a difference for Santorum given how close the polls numbers in Iowa were last night. But starting a war with Fox News, where, O’Reilly notwithstanding, Santorum has gotten plenty of airtime, may be a bit of an uphill battle. Bill O’Reilly is expected to address Santorum’s comments on his program tonight.

The audio via The Mike Gallagher Show below: