Actor and comedian Ricky Gervais had a different take on the hacked nude celebrity photos today. While he made it absolutely clear he finds the release of such photos horrible, he did make a joke about how no one would be able to obtain naked photos of celebrities if said celebrities didn’t take naked photos of themselves in the first place.

Here’s the tweet in question, which has since been deleted: 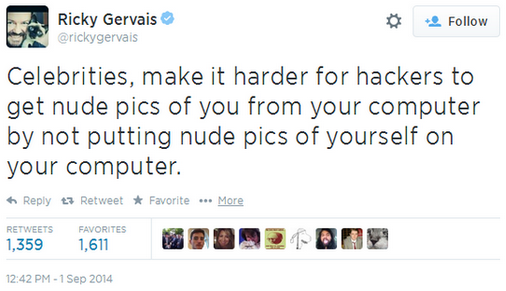 That didn’t exactly go over well. And while Gervais did take down that tweet, he continued to defend himself on Twitter, arguing that it’s really not worth it to be outraged by a joke:

Making a joke about a thing doesn't mean you condone that thing.

Of course the hackers are 100% to blame but you can still makes jokes about it. Jokes don't portray your true serious feelings on a subject

And, of course, he got quite a lot of backlash:

If you don't want your nude pictures passed around on the internet, look like Ricky Gervais.

I might not agree with everything Ricky Gervais says, but I will fight to the death not to have to hear it.

Make it harder for hackers to steal your credit card # by not owning a credit card #rickygervaislogic http://t.co/2mjLBjGlZW @EndRevengePorn

Dear Ricky Gervais, it's easier for ppl not to screen shot your sexist tweets, if you don't write sexist things on twitter.