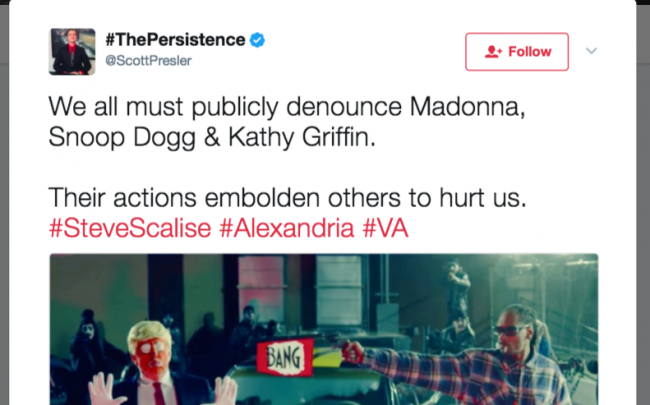 While the details are still unfolding, multiple eyewitnesses are reporting than up to 60 shots were fired by a gunman armed with a high-powered rifle. Senator Rand Paul (R-KY) said that only the presence of Capitol Police prevented a massacre.

The targeted group seems to have been comprised exclusively of Republican lawmakers, and while that is definitely suspicious and suggests it was a targeted attack, it didn’t take long for right wing Twitter to place the blame on Democrats, leftists, and even GOP boogymen like Snoop Dogg and Kathy Griffin.

The media has been signalling to crazies that Trump is illegitimate for months. This was entirely predictable. Blood on their hands.

We all must publicly denounce Madonna, Snoop Dogg & Kathy Griffin.

Their actions embolden others to hurt us.#SteveScalise #Alexandria #VA pic.twitter.com/Sx9KoqJdFJ

Democrats foment absolute hatred aided by the media and now they’re getting exactly what they hoped for in this domestic terrorist attack https://t.co/kd8bnw7Tzp

That makes this a terrorist attack

Every member of #The Resistance Fomenting & calling for violence

Now has blood on their hands https://t.co/1ZvUXKndVL

We DO know that repeated Antifa assaults have gone unreported. We DO know of the left’s culture of violence. It has to stop. Now. https://t.co/yUIeCHqIfB

Tomorrow you’ll be back to palling around with left wing extremists that incite violence against political opponents. https://t.co/iOfhIAewW5

People shooting at Republicans now. An act of violence by the left. Sadly unsurprising, given their violent tendencies. https://t.co/r4iPmizUMC

The Dems have so demonized the Republicans an have stirred the pot today Reps were shot! The Dems should be ashamed of themselves. Insanity