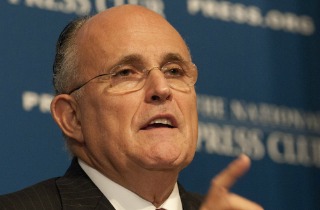 Spicer alleged that Giuliani’s comment received six times the coverage of various Democratic stories, including questions about the Clinton Foundations foreign donors and reports that DNC Chair Debbie Wasserman-Schultz (D-FL) planned to paint President Barack Obama as anti-semitic and anti-woman if he tried to replace her.

“Coverage has been fueled by reporters grasping for new angles or asking any Republican in range of a microphone to respond to his comments and other unrelated questions,” Spicer wrote. (This included Fox News.) “Yet while the media forced potential Republican presidential candidates to weigh in on that story, they did not do the same for potential Democrat candidates when it came to any of their party’s controversies of the week.”

RELATED: Chuck Todd ‘Hates’ the Giuliani Story: ‘It Brought Out the Worst in the Press’

“There’s a pattern here, and it’s time to treat the parties equally,” Spicer concluded. “I look forward to Hillary Clinton and other potential 2016 Democrat contenders to have to answer for the actions of their fellow Democrats.”

Rumors that there’s no such thing as “the media” went unconfirmed at press time. Read the whole dealie here, via the RNC.