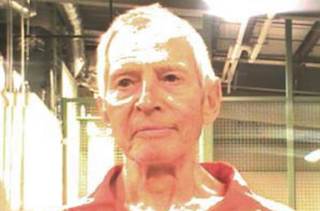 Robert Durst, the real estate heir recently charged with the 2000 murder of his friend Susan Berman, was found in a New Orleans hotel with a latex mask, $42,000 in hundred-dollar bills, and a fake ID with the name Everette Ward, apparently planning on escaping the country and changing his identity.

The report for Durst’s arrest, obtained by ABC News, adds that cops also found a .38 revolver with four live rounds and a spent shell (enough to send him to life in prison, according to Louisiana state law), a passport ID, and “enough pot for about 300 joints.” (That’s not a very specific amount, ABC, but let’s just assume that 300 joints = a lot of marijuana.)

According to TMZ’s report, the mask “covered his head and neck and served to completely alter the characteristics of his face.” Fun fact, high-quality latex masks are really effective at concealing identities, to the point that bank robbers tend to use them to mask identifying features, even their skin color.)

In addition, the money was parceled into smaller UPS envelopes that police believe would be sent to his new hiding place. They also discovered that Durst had withdrawn over $315,000 in cash in the past 35 days.

The report included the results of a search warrant for Durst’s Houston apartment, where police found two copies of the same book, detailing the death of his wife, which is both dumb and creepy.

Durst was recently the subject of The Jinx, an HBO docuseries about his shady past, which recently ended with a bombshell recording of Durst seemingly admitting that he murdered his first wife, his best friend, and a neighbor in three separate incidents.