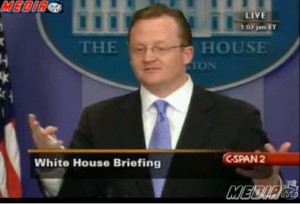 I may be paraphrasing a bit.

The President’s executive order creating a bipartisan commission to look at debt reduction, why is it needed — considering the fact that Democrats control the House, Senate, and the White House?

While Gibbs pointed out that the Republicans oppose even ideas that they think up themselves, he never gets around to explaining why the Democrats can’t get anything done with a much larger majority than the Republicans had when President Bush was mopping the floor with them.

He also gets away with the assertion that there’s no unanimity in either party, a notion that Jake’s question belies. The Republicans are unanimous, have been for years. The Democrats, on the other hand, have been undercutting themselves for years, which leaves the country with the option of either being driven into a ditch, or sitting on the side of the road arguing over dueling Mapquest directions.

The President’s executive order is a step in the right direction, as was his dialogue with Republicans on Friday, but the Obama administration could solve a lot of its problems if it could just get 5 or 6 Democrats in line.

Here’s the exchange, followed by a transcript:

Q The President’s executive order creating a bipartisan commission to look at debt reduction, why is it needed — considering the fact that Democrats control the House, Senate, and the White House?

MR. GIBBS: Well, it’s needed, because I think if you look at the budget documents, we’re going to get somewhere slightly above 3 percent of our GDP taken up in our budget deficit. And I think most people would say 3 percent is about where you need to be. And it’s going to take some tough decisions to close those gaps.

Q But why are the President and substantial majorities of Democrats in the House and Senate not capable of those tough decisions?

MR. GIBBS: Because we understand, Jake, that unless you get 60 votes in this environment, you can’t make those determinations. Let’s use — in one particular instance, the debt commission itself. This was a legislative proposal — and I’m sure many of you have heard me do this — introduced in December, a bipartisan proposal by Senator Judd Gregg, Senator Conrad — one a Republican, one a Democrat — that enjoyed pretty broad bipartisan support.

Normally, 50 votes would carry the day. This proposal got 53 votes when it needed 60. Seven cosponsors of the legislation ultimately voted against the legislation. So you need 60 votes in this environment to get something done.

Q But when you had that vote on the debt commission, you did have 60 votes.

MR. GIBBS: We did have 60 votes, but we didn’t get the 60 votes we needed. We lost seven Republicans that supported the bill. Look, some Democrats don’t support it. I get that. If we would have simply gotten all of the people that either voted for it or said they supported it, we would have gotten far more than 60 votes. Mitch McConnell, who I had the pleasure of sharing a Sunday show with, had supported this two months ago — except when it came time to vote on it.

Q I guess my larger question is, aren’t these the tough decisions that the President and members of Congress were elected to make?

Q Why not? Why is one party not capable —

MR. GIBBS: Because of the —

Q — when one party controls the House, Senate and the White House?

Q Was that your message in October?

MR. GIBBS: Which one?

Q The one you just said to Jake.

Q No, but both parties are here — wouldn’t you be making the case that you’d want Democrats to get elected?

MR. GIBBS: I’m going to vote for a Democrat in November. But, Chuck, the American people want — today is an election day, okay? Go back to what the President said: If every day is election day, then I can assure you we’ll never solve any of the big problems.

MR. GIBBS: Well, hold on — no, no, let me just finish the sentence. Chuck interrupted your time.

Every day is not election day, Chuck. We have elections — sometimes we have special elections, but we have elections every two years for Congress. If every day is election day, we’re never going to solve our problems, because everybody is going to be too busy not trying to save somebody else’s job but trying to save theirs. The American people want Democrats and Republicans in government that represent them to work together to solve their problems.

Q You’re making my point. The point is that Democrats control the House, the Senate, and the White House. Why are you guys not capable of making these tough —

Q Are you just saying that — because it seems to me you’re making the argument that, essentially, underneath it all is, right, Democrats — these are going to require very tough decisions and the Democratic Party is not going to do it by itself because we’re not going to go down and lose our jobs —

Q — without Republicans holding our hands.

MR. GIBBS: Jake, there’s not uniform consensus in one party about how to do it. I think that’s been pretty clear about health care. Lord knows we’ve talked a lot about internal —

Q — willing to do health care, but just Democrats?

MR. GIBBS: Hold on, let me just — let me finish the question. We are going to have to make tough decisions, but in order to get this passed we’re going to need both parties to work together. If you think one party can do it all, you know, I think there are examples not just from the past year but over the past many years that altogether that’s not going to work. Jake, just because you’re not in the majority doesn’t mean you don’t have an obligation to help solve the problems of this country. That’s the message that the President had on Friday to the House Republicans. That’s the message that the President ran on.

Even though the President runs as a Democrat, that doesn’t mean that we’re not going to work with Republicans on trying to solve problems. If that were the case, Chuck, we’d have elections, and then one party would just go about solving everything; the other party wouldn’t even have to show up to work until it was time to have the next election. It may sound like a great idea, but —

MR. GIBBS: Well, I don’t think the commission is a copout.

Q Well, it’s not legislatively binding. And you don’t have Boehner and McConnell signed off on it yet.

MR. GIBBS: Well, it was such a good idea that they supported it a few weeks ago. I don’t — Jake, you can ask them what happened. You can ask Mitch McConnell why sitting on the very same show he was on yesterday when he supported the Conrad-Gregg commission — when it came for a vote he didn’t support it. I don’t know the answer to that. It’s a fascinatingly good question.

But we are going to have to work together to solve these problems. It’s not going to be one person or one party that solves them. I don’t think it’s a copout, because what the President will propose is that Democrats and Republicans should work together to agree on proposals that he believes should be voted on. Understand that the legislation that failed would have required that the recommendations that that commission came up with be voted on by the House and the Senate, like a base closure commission.

Q Right, and this executive order will not do that, because it cannot do that.

MR. GIBBS: The executive order will ask that based on the number of people that are chosen to serve on the commission — some by Democrats, some by Republicans — that a certain number of people agree in order for the recommendation to be voted on by Congress.

But, Jake, the power — it is interesting that — I think we’ve heard from some quarters that Republicans just may not appoint anybody. Well, tell me how you’re going to solve the big problems of this country if in a very polarized country one political party is not going to join in working on that. It’s just — it’s not going to happen.

Q I’m not going to — and it’s the last question I have on this, and I’m sorry, but I’m not going to challenge the notion that the other party may be behaving cravenly in this instance and with the vote that you’re talking about. But isn’t the whole point of being President and controlling the House and Senate to man up and make these tough decisions —

Q — whether or not it costs you at the ballot box in November?

Q You are — you’re saying, we’re not going to do it unless we have sign off from the Republicans.

MR. GIBBS: No, no, no. We’re not going to make progress unless we have sign off from the Republicans. But again, Jake, there’s not unanimity in one party on either way forward. Again, this President has instituted spending costs last year nobody thought we were going to get, including killing an F-22 program at the Pentagon. We’ve outlined a series of cuts this year. We’ve taken on the cost of health care and how it affects the federal budget. We’ve got some skin in the game, Jake.

Q But the President, in his remarks this morning, talked about how some of the cuts were painful. What was the most difficult thing for the economic team and the President to leave out of the budget?

MR. GIBBS: I would have to talk to those guys in terms of what — I was not in every one of the meetings.

Q But the President didn’t express that there was something that he really would have rather had, but in the end they took it out?

MR. GIBBS: Look, I think there are — I have not heard him talk in particular. I mean, obviously there are — budgets have to be a list of your priorities. And in tough economic times you can’t afford everything.

Look, one of the easier things to do, going — again, let’s go back to what had happened for a while, one thing would be to propose a series of new spending and not have to pay for any of it. That’s sort of what got us into this mess.