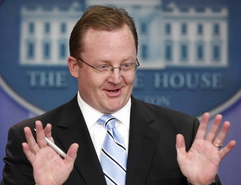 Yesterday, Mediaite’s Robert Quigley posted a list of 8 gaffes (later reduced to 7) by White House Press Secretary Robert Gibbs, along with the assessment that Gibbs “largely gets a free pass from the media for his many blunders.”

I thought it was only fair to give Gibbs a chance to respond, so I emailed him to see if he had any reaction to the piece. While he said he had “no real response,” and that he was “happy to get the criticism,” he did have a few factual corrections for us. Let’s see how Gibbs’ fact-check stacks up against our double-fact-check.

1. Sarah Palin’s Healthcare Comments – “…Gibbs’ snark yesterday about how ‘you [reporters] cover a lot of process and you cover a lot of — you cover noise and heat and light’ was the wrong kind of dismissal, and did nothing to brush the matter away.”
Gibbs: “On #1, I didn’t brush off Palin yesterday – I responded by using stuff from a GOP Senator calling her accusation nuts.”
Point: Gibbs. While he did make the “heat and light” statement, that was in response to a broad question about messaging. In responding to Palin’s quote, he did cite Georgia Senator Johnny Isakson’s statement that the “death panel” idea was nuts.

2. “Elected Leader” Ahmadinejad?
Point: Mediaite. Gibbs didn’t offer anything on this, and in fact, clarified his statement the day after he made it.

3. Laff-A-Lympics – Gibbs has laughed, or caused laughter, on more than 600 occasions. Singled out was this instance, where he joked that “only in Washington” is $100 million not considered a lot of money, even when compared to the national debt.
Gibbs: “On #3 if that’s a gaffe then so be it, same with #4.”
Point: I’ll give Gibbs #3. Humor is subjective, and Gibbs’s joke was clearly at the expense of free-spending D.C., not the national debt. Besides, I wouldn’t want to discourage Gibbs from occasionally livening up what would otherwise be some intolerably dull briefings. As a former stand-up comic, I’ve got to admire the guy’s timing.

4. Taking on Cheney – Gibbs compared Cheney to Rush Limbaugh, and called him part of the Republican cabal. “When you’re the White House Press Secretary, show a little respect for the former Vice President, even if you disagree with him.”
Gibbs: “On #3 if that’s a gaffe then so be it, same with #4.”
Point: #4 Mediaite. On #4, I’m tempted to call this a push because Cheney did some hitting below the belt of his own, but since Gibbs concedes the point, I’ll take it.

5. Twittergate – “Gibbs’ July 24th statement on C-SPAN that Twitter is blocked on White House computers led to a firestorm of speculation on the Internet.”
Gibbs: “#5 set off a firestorm!? Weird that I missed the firestorm.”
Point: Mediaite 1 – Gibbs’ statement to C-Span was technically accurate – Twitter is blocked on White House computers, except those in the New Media office and they’re in the Executive Office Building, anyway. Since the “firestorm” was mostly caused by the Interwebs panicking that Twitter had been blocked by the White House itself, we removed that item. It was fixed it before he responded to us, but we’ll award a point to Gibbs for observing that there might not have been a firestorm. Also for not being wrong in the first place, though he should know better than to be flip about Twitter. The Interwebs get very excited about Twitter.

6. What Joe Biden “Meant to Say” About Swine Flu -“on April 30th, Gibbs attempted to spin Biden’s infamous “closed container” remarks on swine flu into a handy health advisory. Jake Tapper called him out for not saying anything “remotely close to what [Biden] said.”
Gibbs: “I understand what he said, and I’m telling you what he meant to say.”
Point: Mediaite, since Gibbs conceded this one as well. However, his grilling by Tapper illustrates that he doesn’t exactly get a free ride, either. Half a point to Gibbs.

7. “The Fraternal Order of Police Endorsed McCain” – “When a reporter asked if Obama’s remarks during Gates-Gate would lead to a backlash among police groups, Gibbs responded, ‘I think the Fraternal Order of Police endorsed McCain, if I’m not mistaken.’ It quickly shot to the front page of Drudge. No doubt Gibbs had prepped the response, but it came out at the wrong time in the wrong way, and made Obama’s response to the situation seem vengeful.”
Gibbs: “I love #7 since I was responding to Mark Knoller asking me if the FOP endorsed Obama – if this guy sees it as a gaffe to have said they didn’t then so be it.”
Point: Gibbs. He was asked directly, and answered accurately.

8. Monarchy in the UK – Gibbs unwittingly kicked a hornet’s nest in June when he told reporters that the Obama administration was working to get the Queen to attend D-Day commemorations in Normandy…As it turns out, the White House hadn’t even been in contact with Buckingham Palace; Gibbs was winging it. The Queen did end up going to the commemorations, though.
Gibbs: “On #8, the Queen hadn’t been invited, we were in touch with the Brits and she didn’t come – Prince Charles did.”
Point: Gibbs. He’s on the money here, as Prince Charles did, indeed, fill in for the Queen at the D-Day commemoration. Gibbs gets an extra half-point for pointing out that the White House was, indeed, in touch with the British over the snub.

We’re also awarding Gibbs a full point for confirming that he was the goalkeeper, rather than the goalie, of the North Carolina State Wolfpack, and for calling the game “soccer,” rather than “football.” Unfortunately, we also have to deduct 3 points because he wasn’t a baseball player.

EDITOR’S TIEBREAKER: Wow, we feel like Dumbledore after a Quidditch match! However, the tie must be broken – and the record made clear. Since Mediaite erred in asserting that Her Majesty the Queen had attended the D-Day commemoration ceremonies, and since the original posts was about gaffes, and this itself was a gaffe, we hereby award an extra point to Gibbs for being right. Final score: Robert Gibbs 4, Mediaite 3 Gibbs wins – but if the White House tweets this out, then won’t we all be winners? Thanks for playing!