Robert Gibbs: ‘No Doubt, Enough Seats In Play For GOP To Win House’ 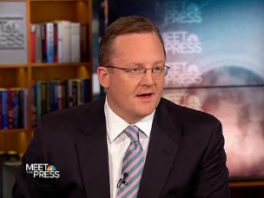 I suppose this could be fairly described as facing facts or perhaps it’s just admitting the obvious. Either way this was a rather striking statement from Press Secretary Robert Gibbs who told David Gregory on Meet the Press this morning that “there are enough seats in play that could cause Republicans to gain control.”

This will depend on strong campaigns by Democrats. And again, I think we’ve got to take the issues to them. You know, are — do you want to put in, in to the Speakership of the House a guy who thinks that the, the financial calamity is, is tantamount to an ant? The guy who’s the ranking member of the Energy and Commerce Committee, Joe Barton, started his congressional testimony of the CEO of BP by apologizing, not to the people in the gulf, but to the CEO. I think that’s a perfect window, not into what people are thinking, but the way they would govern.

Joe Barton, John Boehner, those are the type of things you’ll hear a lot, I think, from both the president and local candidates about what you’d get if the Republicans were to gain control.

Emphasis mine. Because in relative keeping with President Obama‘s “snake oil” remark last week, Gibbs goes to some subtle lengths here not only to make the midterms a vote of confidence (or, really, lack thereof) in the GOP but simultaneously puts the responsibility to maintain the House on “strong campaigns by Democrats.” Neither of which necessarily has anything to do with Obama’s popularity or track record. Watch below.