Robert Gibbs On Health Care Ruling: ‘We Are Confident It Is Constitutional’ 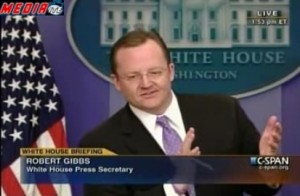 Earlier today a Virgina-based federal judge Henry E. Hudson declared that the newly passed Health Care reform law passed by Obama is unconstitutional, though he did not officially halt the measure. As is the case in most judicial decisions, the story is far from over: during today’s press briefing, White House Press Secretary Robert GIbbs averred confidence that the controversial law is in fact constitutional. Meanwhile, the federal judge who made the decision has come under scrutiny over the partial ownership of a GOP consulting firm has brought .

A Virginia federal judge on Monday found a key part of President Barack Obama’s sweeping health care reform law unconstitutional, setting the stage for a protracted legal struggle likely to wind up in the Supreme Court.

U.S. District Judge Henry Hudson struck down the “individual mandate” requiring most Americans to purchase health insurance by 2014. The Justice Department is expected to challenge the judge’s findings in a federal appeals court.

As the Huffington Post and others first noted last July, Hudson’s annual financial disclosures show that he owns a sizable chunk of Campaign Solutions, Inc., a Republican consulting firm that worked this election cycle for John Boehner, Michele Bachmann, John McCain, and a whole host of other GOP candidates who’ve placed the purported unconstitutionality of health care reform at the center of their political platforms. Since 2003, according to the disclosures, Hudson has earned between $32,000 and $108,000 in dividends from his shares in the firm (federal rules only require judges to report ranges of income).

Campaign Solutions was instrumental in the launching of Sarah Palin’s PAC (though Palin has since split with the firm), and Ken Cuccinelli, the Virginia attorney general who filed the lawsuit that Hudson ruled in favor of today, paid Campaign Solutions $9,000 for services rendered in 2010.

Finally, during today’s White House briefing, Mr. Gibbs assured the press in attendance that the health care reform is in fact constitutional, and that there should be no expected change in how individuals should expect new reforms to take place.

Watch the video from C-SPAN below: