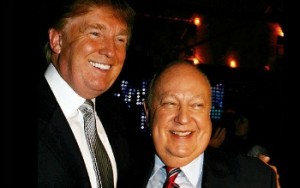 Pop quiz, hotshot: you’re trailing by huge margins in almost every battleground state, you’re coming off of a disastrous few weeks of campaigning, and you’re getting ready to debate the first woman ever to be nominated for president by a major political party. What do you do? What do you do?

If you’re Republican presidential nominee Donald Trump. you hire a guy who just got fired from Fox News amid a flurry of sexual harassment allegations to help you with debate prep, and more. From The New York Times:

Roger Ailes, the former Fox News chairman ousted last month over charges of sexual harassment, is advising Donald J. Trump as he begins to prepare for the all-important presidential debates this fall.

Mr. Ailes is aiding Mr. Trump’s team as it turns its attention to the first debate with Hillary Clinton, the Democratic nominee, on Sept. 26 on Long Island, according to three people briefed on the move, who insisted on anonymity because they were not authorized to discuss the matter.

Two of them said that Mr. Ailes’s role could extend beyond the debates, which Mr. Trump’s advisers see as crucial to vaulting him back into strong contention for the presidency after a series of self-inflicted wounds that have eroded his standing in public opinion polls.

It was not clear when Mr. Ailes began helping the campaign. He resigned his post at Fox News on July 21 amid an investigation into allegations of sexual harassment by former female employees that occurred after a lawsuit by the former anchor Gretchen Carlson.

According to the Times, it;’s not known whether Roger Ailes will be paid for his work with Trump, although maybe he’ll take it out in trade.

Update: The Trump campaign has released a statement disputing the report:

This is not accurate. He is not advising Mr. Trump or helping with debate prep. They are longtime friends, but he has no formal or informal role with the campaign.