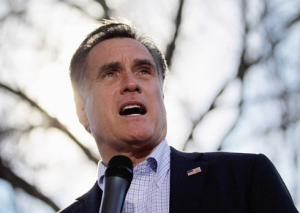 Mitt Romney held a conference call with top donors on Wednesday to speak about his election loss. The former presidential hopeful reflected on his campaign, as well as the approach that President Barack Obama. In part, he said, the president won because of the “gifts” he gave to key groups of voters.

“The President’s campaign,” he said, “focused on giving targeted groups a big gift—so he made a big effort on small things. Those small things, by the way, add up to trillions of dollars.”

The Los Angeles Times reported Romney’s remarks — which included arguing that “the Obama’s health care plan’s promise of coverage ‘in perpetuity’ was ‘highly motivational’ to those voters making $25,000 to $35,000 who might not have been covered, as well as to African American and Hispanic voters.”

“In each case they were very generous in what they gave to those groups,” he said. More of his remarks, via The New York Times:

“With regards to the young people, for instance, a forgiveness of college loan interest, was a big gift,” he said. “Free contraceptives were very big with young college-aged women. And then, finally, Obamacare also made a difference for them, because as you know, anybody now 26 years of age and younger was now going to be part of their parents’ plan, and that was a big gift to young people. They turned out in large numbers, a larger share in this election even than in 2008.”

“You can imagine for somebody making $25,000 or $30,000 or $35,000 a year, being told you’re now going to get free health care, particularly if you don’t have it, getting free health care worth, what, $10,000 per family, in perpetuity, I mean, this is huge,” he said. “Likewise with Hispanic voters, free health care was a big plus. But in addition with regards to Hispanic voters, the amnesty for children of illegals, the so-called Dream Act kids, was a huge plus for that voting group.”

Romney also spoke favorably of his team, noting that there was “no drama in the campaign—not that everybody was perfect; everybody has flat sides, but we learned how to accommodate each other’s strengths and weaknesses, to build on the strengths.”

It was “a very solid team,” he said. “The organization did not get in the way.”

According to the NY Times, the 20-minute call “also featured an appearance by Neil Newhouse, the campaign’s pollster, Spencer Zwick, the national finance chairman, and Mason Fink, the finance director.”

“I am very sorry that we didn’t win,” Romney told donors. “I know that you expected to win. We expected to win…It was very close, but close doesn’t count in this business.”