Ron Paul In Statistical Tie For Lead In Iowa Poll; Does He Have A Shot?

Ron Paul In Statistical Tie For Lead In Iowa Poll; Does He Have A Shot? 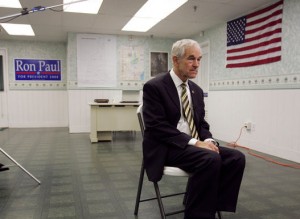 With embattled candidate Herman Cain‘s ride atop the polls apparently past its apogee, it looks like this Newt Gingrich thing is really going to happen. Since Gingrich’s moment in the sun figures to have the durability of a nitroglycerin piñata, a new poll of likely Iowa caucus-goers that shows a statistical four-way tie begs the question, “Who’s next, and why can’t it be Ron Paul?”

The Bloomberg poll has Herman Cain at 20 percent, Ron Paul at 19 percent, Mitt Romney at 18 percent, and Newt Gingrich at 17, with a margin of error of 4.4 percent. Currently, Newt Gingrich is getting all the flavor of the moment buzz, but if you doubt his place at the top has the shelf life of day-old sushi on a picnic table, check out the Malachi Crunch assessments by Redstate’s Erick Erickson and MSNBC’s Rachel Maddow.

If that doesn’t do it, Bloomberg’s poll lets some pigeons loose on Gingrich, too. Given a list of things that  48% of likely Iowa caucusgoers responded that “If the candidate has been married three times and had extramarital affairs,” it would cause them to rule out a candidate, exceeded only by “If the candidate has favored a mandate to buy health insurance,” at 58%. Of the 12 possibilities given to rule out a candidate, though, Ron Paul fits exactly none of them.

Paul’s success in this poll, and his possible success in the caucuses, can be attributed to a huge lead in another key stat from this survey. Asked if they “have been contacted by the campaign through email, direct mail, telephone, or by someone coming to your door in the past year or by meeting the candidate in person,” a whopping 67% responded “yes,” more than 20% higher than Romney and Cain, and more than doubling Gingrich’s 29%. Especially in early states, the ground game is king, and Paul is running over his co-frontrunners.

There are many theories as to why the media dismiss Ron Paul, no matter how well he does in straw polls, or how much money he raises, or how he consistently outpolls more buzzworthy candidates. In fairness to the media, most conservatives who aren’t Ron Paul supporters (known as “Ronulans,” among other, less complimentary monikers) fall into two camps: establishment types who roll their eyes at the very mention of his name, and movement conservatives who admire Paul, but view his candidacy as quixotic and fatally flawed by one of several popular Paul motifs (legalizing marijuana, ending the Fed, telling hard foreign policy truths).

The political media is supposed to be immune to this kind of pre-judgment, but the degree to which they ignore Ron Paul has been a running joke since the 2008 campaign. Perhaps it made some sense then, but this year, where the Republican field is like an Oprah Winfrey audience, each of which has a ride atop the polls under their chairs, and as this poll shows, each of whom has had a big, fat, disqualifying flaw, why is Ron Paul still being ignored?

He’s not a crazy birther, he doesn’t think the HPV vaccine causes “mental retardation,” he kills it in debates, he’s been married to the same woman since 1957, he knows who the president of Ubeki-beki-stan-stan is, and pound for polling pound, the guy is a fundraising Godzilla. When Newt Gingrich flames out, there won’t be much of a choice left, since all of the not-Romneys except Ron Paul and Rick Santorum have been used up. Even in Iowa, Santorum can’t even beat the margin of error at this point. Ron Paul has more than earned the right to be taken seriously, and if he’s still polling like this in a few weeks, maybe he will be. Finally.