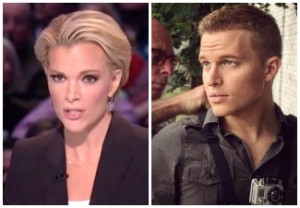 I’m no fan of Fox News, or of Megyn Kelly, but her performance at Thursday night’s debate was nothing short of stellar. Now, though, liberals like former MSNBC host Ronan Farrow and Fox watchdog Media Matters are trying to take her best moment of the night and use it to accuse her of bigotry and/or encouraging bigotry.

The moment to which I am referring happened during the Fox News Republican debate Thursday night, when Governor Chris Christie (R-NJ) tried twice to sneak a big fat lie past Kelly, and she batted it right back in his face:

KELLY: In December, two radical Muslims killed 14 people in San Bernardino, California. Neighbors of the terrorists said that they did not report the couple to law enforcement prior to the crime, because they were afraid that they would be accused of profiling. Now, you have said that we should not profile. How do you square that with the San Bernardino case?

CHRISTIE: Well, because you can do it without profiling, Megyn, when you do it on the facts. What those facts knew was that these folks had weapons. They knew that they were talking about trying to take our country and attack it. That’s not profiling, that’s law enforcement. And that’s the difference between somebody who knows how to do this and somebody who’s never done it before.

KELLY: They didn’t know they were going to attack the country.

CHRISTIE: They knew they were talking about the issues of attacking people, Megyn. They knew that.

KELLY: That’s not true. The neighbors said they saw men going in and out of the garage. They saw packages being delivered. They saw Muslims, and they did not think that was enough to call the cops. Do you?

CHRISTIE: Listen, I think that what people should do is use their common sense. And the fact is, let law enforcement make those decisions. I’ve told people that from the time I was U.S. attorney 13 years ago.

Christie was making a false claim that many other journalists have failed to correct, including at MSNBC. A few weeks ago, they broadcast Donald Trump making a similar claim:

“They didn’t want to report them because they thought it was profiling. Okay. They saw bombs. They saw pipe bombs. When a bomb is this long, got to put too many of them together for a bathroom, right?”

So, Megyn Kelly, with whom I otherwise have many significant issues, was doing fantastic work here, and forcing Christie to square his “opposition” to profiling with the fact that there was no smoking-gun foreknowledge that was quashed by “political correctness.”

Not so much, though, if you listen to Ronan Farrow, who O’Keefed the video and accused Kelly of “casual bigotry”:

Ditto Media Matters, who tweeted that by asking this question, Kelly was “suggesting” that Christie endorse profiling:

That’s an absurd claim to make, especially when you consider that Kelly caught Christie lying about the amount of reasonable suspicion these neighbors had, then forced him to reconcile his lie with the facts. Is it enough for someone to be Muslim and a frequent recipient of packages to call the cops? That’s exactly the follow-up I would have asked. To accept Media Matters’ premise is to deny Christie his agency, because he could easily have responded “No, I guess not.”

If there was pressure for Christie to endorse profiling, it came from the electorate he’s trying to frighten, not from Megyn Kelly. If there was bigotry, it was in Christie’s naked lying, not Megyn Kelly’s stern correction.

I’m all for calling the media out when they screw up, but when thy do a great job, as Megyn Kelly did here, we ought to encourage that.