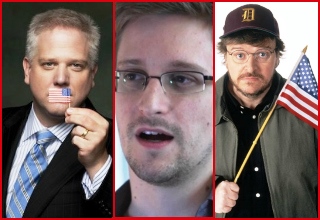 Everyone loves an underdog.

For the sake of this column, the aforementioned “everyone” is relegated to the media. Left media, right media…for once, it actually doesn’t matter. It’s David (OK, Edward) with Goliath (our federal government…which is quickly becoming–in the eyes of some–the scariest entity since the Zod Administration of Superman II).

For Snowden to out himself as a whistleblower of the government collecting info on billions of phone calls and activities on the Internet, the former CIA employee has cast himself as a hero in the eyes of the media, and ultimately, the public. And guess what? That attempt is mostly succeeding.

In a new CBS MarketWatch online poll, Snowden is being called a “patriot” by almost 70 percent of all respondents. Rather than being caught—which likely would have happened—the 29-year-old’s decision to come forward is being called gutsy, ethical, fearless. In the end, many are saying he’s just a regular guy with his heart in the right place.

Michael Moore has done the same.

So with even these guys agreeing and Bizarro World officially open for business, the questions are:

Is this a case of the media amplifying the extremes in each party?

Is this just another type of media bias?

Of course, not everyone is hoisting Snowden on their shoulders. Jeffrey Toobin (a legal analyst for CNN and the New Yorker) calls him “a grandiose narcissist who deserves to be in prison,” while Fox News contributor Ralph Peters—a former Lieutenant Colonel—is actually calling for the death penalty under the charge of treason (Joffrey Baratheon, eat your heart out). Diane Feinstein (D-CA) has dropped the T-bomb as well.

But opinions like Toobin and Peters (and a few others) appear to be the exception than the norm. On one side of the aisle, conservative media loves the story because its keeps its scandal streak against the President going (only 50 more to go before catching DiMaggio). On the other side, liberal media loves the story because it’s like, you know…Erin Brockovich and stuff…just a brave citizen standing up to the man. And remember the most important rule: NSA spying is only bad when the opposing party is doing it.

Keep this in mind as well: Mr. Snowden is guilty of one of the largest intelligence breaches in U.S. history. But thanks to being the human version of Seabiscuit, not much is being discussed in terms of the national security implications his decision may have set in motion. And that damage doesn’t even include how many future moles—justified and otherwise–Snowden’s actions may have inspired.

In rooting for Edward, will the media really be compelled to ask if the government can fight a war on terror (or whatever it’s being called these days) while always worrying if clandestine programs are at risk of being exposed?

I’m just the media guy here and will not make a judgment one way or the other. That’s not the point of the column. Instead (for the sake of this discussion), the question really is: Are we witnessing a whole new kind of media bias here?

For now, it’s a stroke of genius for Snowden to cast himself as a sympathetic figure. If and when he is brought to justice (he’s currently holed up in a hotel in Hong Kong), many potential jury members may have already been swayed in his favor…all thanks to the acclamatory coverage Snowden has received.

Media bias comes in many forms.

Sometimes it isn’t a matter of left vs. right.

But underdog versus authority…