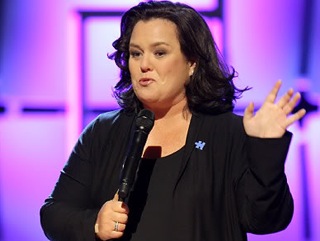 It may not have been what Chris Brown had in mind, but it appears the disgraced star has finally found an ally in the celebrity world: Rosie O’Donnell, who on her radio show this week accused his detractors (and ABC host Robin Roberts) of racism for maligning his window-breaking behavior more than, she argues, the equivalent by white stars. A name notably absent from O’Donnell’s analysis? Rihanna.

“I just don’t know why this kid seems to be held to a different standard than anyone else,” O’Donnell tells executive producer Janette Barber on the March 29th edition of her program, to which Barber responds that she can’t help but wonder if race is an issue (O’Donnell addressed the issue only this week as she had been on vacation). “I totally think there is,” O’Donnell replied, “and I also think it’s why he felt he was safer with Robin Roberts.” O’Donnell doesn’t flesh out this point at all other than later adding that she felt “badly” for Chris Brown and “mildly angry” at Roberts while watching her interview with Brown. Given the context, however, it wouldn’t be amiss to interpret it as an accusation of some sort of racial betrayal on Roberts’ part not to go easier on Brown, an accusation that leaves O’Donnell’s further point– which could perhaps have some merit– exposed to all kinds of criticism.

That further point that gets lost somewhere along the Roberts accusation trail she later elaborated on, adding that she did “think that there is a societal paradigm in which you have to be an angel or a thug if you’re a black male.” For this, O’Donnell cites Tupac Shakur as an example of a rapper caught in between the two extremes. That more nuanced argument that there is a history of easily maligning black male stars as violent is one that could be corroborated, especially if the fact pattern being examined is only the story in which Brown throws a chair through a window and everyone panics, or the possible career setbacks Kanye West experienced at grabbing a microphone away from Taylor Swift.

But to leave the domestic abuse issue hanging without addressing what really put the last nail in Brown’s career’s coffin makes it very difficult to take O’Donnell’s sympathy for Brown seriously. Though, before going there, it is worthy of note that rumors of the death of Chris Brown’s career have been greatly exaggerated; his album is currently #1 on the Billboard charts. But the image that really set back Brown’s career had nothing to do with skin color or broken studio– it was this photo of a beaten Rihanna after police found her. Sure, white stars have committed domestic abuse and not gotten anywhere near as much public humiliation as Brown (Charlie Sheen, weird drug-infused performance art folk hero, comes to mind). Had O’Donnell laid that argument on the table, she may have been able to cultivate a meager, albeit respectable, point of defense for Brown. Not addressing the battered elephant in the room does a major disservice to what could, with the benefit of the doubt, have been construed as valid racial/sociological commentary and renders it contrarian blather.

Below is the full audio from Rosie O’Donnell’s radio program: