RT America Under Fire for Reporting Michael Flynn ‘Retired,’ Rather Than Resigned

You might be inclined to think national security advisor Michael Flynn resigned his office amid scandal Monday evening, but according to Russian government-owned RT America, he merely “retired.” 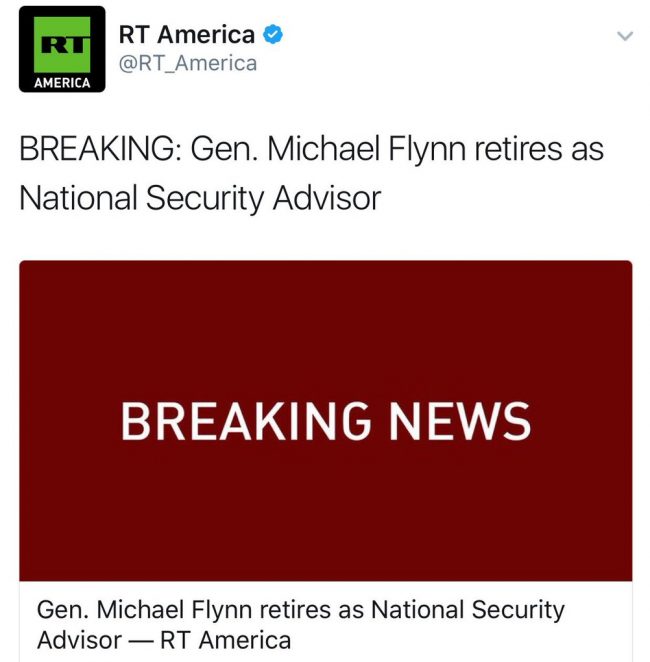 The tweet was savaged by those journalists who don’t answer to the Kremlin.

Having nothing left to accomplish, Flynn returns to a grateful nation satisfied in a job well done. https://t.co/B6hJ1bn9os

I once “retired” from a waitress job after throwing a drink in an asshole’s face. https://t.co/IAL9s168pd

This is the Russian propaganda version of parents telling their kid that the family dog “went to live upstate on a big farm.” https://t.co/dmM0epBqi3

LOL. Russian propaganda network says Gen. Flynn “retires.” As if he simply turned 65 and decided he wanted to live in Palm Springs. https://t.co/qd5FLHzeOv

He took the job but then realized he was getting old. This is the be-all-end-all of propaganda tweets. https://t.co/GCs9CBIUFa

The tweet was later deleted, and the story the tweet linked to has been updated with the more accurate “resigns” verbiage.