Run DNC: Who Were The Winners And Losers Of The Week In Charlotte? 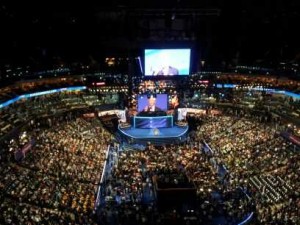 The 24/7 news cycle, particularly during a peculiar Presidential campaign, is now challenging our short-term memories more than ever.

Case in point: Think about the hot political questions of just one week ago:

1) How will Democrats handle the Reagan-recycled question: Are you better off now than you were four years ago? (Answer: Not very well.)

2) Will Bill Clinton upset the apple cart at the Democratic National Convention with a rogue, self-absorbed speech? (He did not… quite the opposite.)

3) Will the President be able to fill Bank of America Stadium to simulate the electric Invesco Stadium atmosphere in Denver in 2008? (We’ll never find out.)

How the focus has changed, huh?

Instead, the DNC narrative this week primarily included:
• The big man himself (God)
• Fascism
• Jeopardy-like trivia such as: “What is the capital of Israel?”
• The First Lady giving her husband and a former President a run for their money in the oratory department

And that’s the purpose of this weekly offering: to help you track the dizzying events of just one week of political coverage, while illustrating how quickly top stories and targets can change.

Since this is an Olympic year, the following awards for the week will be presented thusly:

Gold Medal: MSNBC
In what MSNBC President Phil Griffin is calling “Probably the best day in our 16 day history”, the progressive network shockingly beat CNN (4.1 million vs. 3.9 total viewers) and FOX News (2.4 million, down from over 9.1 million on the final night of the RNC convention).

The question for MSNBC now is if they hold a sizable audience outside what the New York Times calls, “The MSNBC, er, Democratic National Convention.” Or will they be the Dexy Midnight Runners (the band behind the one-hit wonder “Come On, Eileen”) of cable news AC (After Charlotte).

From the “If you told me files…” from 1998: If you told me an impeached President who was pleasured in the Oval Office by an intern would become what FOX’s Charles Krauthammer called this week his party’s Ronald Reagan, I’d recommend you cut down on the peyote.

But there he was, on a big stage 14 years later and more beloved than any other member of the party (including the current President), soaking in the giddy admiration of delegates and MSNBC hosts alike. As former McCain senior campaign strategist Steve Schmidt said, “I wish to God, as a Republican, we had someone on our side who had the ability to do that. We don’t.”

Reviews on the Clintonian-long speech were mostly positive, some even hilarious.

FOX’s Greg Gutfeld (via Twitter): “During Bill Clinton’s speech, a quart of milk turned to cheese.”

Also gone are the days of politicians having the ability to exaggerate or use invalid truths without being called out on it. Now all networks and print media are scrutinizing every word via fact-checkers and making those findings a central theme in their coverage. Emerging issue: Fact-checkers are now being fact-checked.

Tough week for the DNC Chairwoman (and a tough month for that matter). After all, when a straight-shooter like Anderson Cooper states Wasserman-Schultz is living in “an alternate universe” after saying there wasn’t a change in a DNC platform that included an omission of the word “God” and recognizing Jerusalem as Israel’s capital, you know it’s not good times.

The seven-day swoon began when Debbie told a crowd in North Carolina that Israel’s ambassador to the U.S. (Michael Oren) had confided in her that Republican policies were “dangerous” for Israel… an assertion that Oren has since called a lie. Wasserman Schultz proceeded to accuse Washington Examiner columnist Philip Klein of deliberately misquoting her.

One problem: Klein had audio of the interview to prove Wasserman’s claims false.

When asked if she would apologize: “No, I definitely will not.”

Are Dems now thinking about what could have been if they had Clinton speak on Tuesday night instead of an evening when there weren’t 24 million people watching the NFL season opener? In fact, considering the ratings juggernaut football has now become (and given that Dallas always draws well and the Giants are the defending Super Bowl champs), wouldn’t it have made more sense to move the major speeches of the convention to Monday, Tuesday and Wednesday?

Under this scenario, football stays on Thursday night (as does the MTV Awards) and real competition for eyeballs vanishes. Republicans having their convention when many were on vacation (and not watching TV) leading up to Labor Day weekend wasn’t exactly bright, either…

Bronze Medal: Nazi Party
The third rail of analogies is using anything pertaining to Hilter, Nazis, or Germany during the World War II era in general, particularly in politics. This week at the DNC alone, three party members, apparently deciding the latest craze of screaming racism at everything Republican wasn’t effective, decided to give good ‘ol facism a try.

Monday: The Chairman of the Democratic Party in California, John Burton, left Charlotte altogether after associating GOP tactics to the “big lie” approach infamously exercised by Nazi propagandist Joseph Goebbels. Burton returned to California for a pre-scheduled root canal appointment, because, you know, root canals are the type of procedures scheduled well in advance and during your political party’s most important week…

Tuesday: Burton’s reference was light compared to the Chairman of the South Carolina Democratic Party (Dick Harpootlian), who said South Carolina Governor Nikki Haley “was down in the bunker a la Eva Braun.” And following an emerging game plan of doubling down on stupid, Harpootlian has since steadfastly refused to apologize for comparing a sitting Governor to Hitler’s mistress.

Wednesday: Since bad things happen in threes, Kansas Democratic Labor Committee President Pat Lehman decided to share his perspective on alleged voter suppression by Republicans: “It’s like Hitler said, if you’re going to tell a lie, tell a big lie, and if you tell it often enough and say it in a loud enough voice, some people are going to believe you.”

The thing about ever mentioning Hitler or Nazis is once either word is mentioned, nothing said after the “Hitler” or “Nazis” part is heard or remotely perceived as rational. Just ask Hank Williams Jr. or Megan Fox…

52,756: Number of tweets per minute President Obama’s speech prompted just after it ended (new record)
30.66: Average number of words-per-sentence in Michelle Obama’s speech (15.12 WPS in Ann Romney’s speech)
12: The number of gentlemen’s clubs in Charlotte (eight less than Tampa) Speaking of adult entertainment, they say the election season doesn’t truly begin until after the conventions.

Given what we’ve seen over the past two weeks in Tampa and Charlotte, what was originally thought to be a tedious campaign (in comparison to 2008) promises to be captivating, close and comical.

Like cartoons and college football, I’ll be here every week to review a week’s worth of fun in one tidy package.

See you next week.