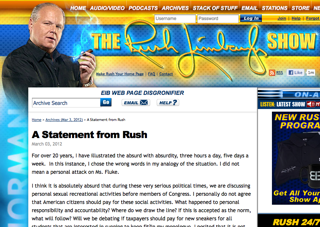 Rush Limbaugh catapulted himself to the top of the news cycle this week by saying that a law student was a “slut” and a “prostitute” for claiming that law students could often not pay for their own birth control. This took up much time an energy on both sides, prompting even a movement for sponsors to boycott Limbaugh’s show over the comments. Earlier today, Limbaugh released a statement on his website noting that, while absurdity is a tool he often picks out of the shed, he “sincerely apologizes” for what he describes as “insulting word choices.”

The full statement as it appears on Limbaugh’s website below:

For over 20 years, I have illustrated the absurd with absurdity, three hours a day, five days a week. In this instance, I chose the wrong words in my analogy of the situation. I did not mean a personal attack on Ms. Fluke.

I think it is absolutely absurd that during these very serious political times, we are discussing personal sexual recreational activities before members of Congress. I personally do not agree that American citizens should pay for these social activities. What happened to personal responsibility and accountability? Where do we draw the line? If this is accepted as the norm, what will follow? Will we be debating if taxpayers should pay for new sneakers for all students that are interested in running to keep fit?In my monologue, I posited that it is not our business whatsoever to know what is going on in anyone’s bedroom nor do I think it is a topic that should reach a Presidential level.

My choice of words was not the best, and in the attempt to be humorous, I created a national stir. I sincerely apologize to Ms. Fluke for the insulting word choices.

RELATED: Bill Maher Distinguishes Himself From Limbaugh’s ‘Slut’ Remark: ‘I Don’t Have Sponsors’

Watch the initial report from Fox News below: