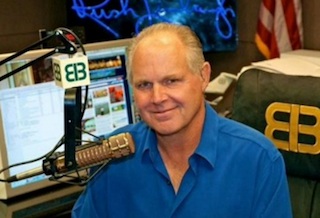 Today on his radio show, Rush Limbaugh lambasted CNN and its “info-babes” (stay classy, Rush) for how they’re treating the Occupy Wall Street protesters. He played a recent clip of CNN’s Randi Kaye interviewing a protester on Wall Street and then compared it to an old clip of of Susan Roesgen getting in a fight with a Tea Party protester in 2009. The implication was clear.

One might argue that it’s unfair to compare two isolated clips featuring two different reporters and call them representative of an entire network. However, Limbaugh’s certainly on the right track with this.

It appears that the Occupy Wall Street protests have become the “Left’s Tea Party.” Sure, there are a ton of problems with that statement but the media’s been pushing the narrative and, now that even Rush Limbaugh’s picking it up, it’s clear it’s going to stick. So, if that’s now the case, it only makes sense to look at how different people and organizations have responded to them.

When Limbaugh wonders why no one is asking about the racial diversity of the Wall Street protests, he’s asking the wrong question. He’s got to think analogously. And, once he does that, he’s see that, for every time someone said the Tea Party was just old people, someone now is saying the OWS group are just hippies. For every accusation that the Tea Party was racist, there’s someone on the news now accusing OWS of being potentially violent revolutionaries. And, while the Right was always quick to jump on Barack Obama for saying anything seemingly negative about the Tea Party, we have a GOP presidential candidate agreeing that the Wall Street Protesters are “anti-Capitalism” shills trying to instigate “class warfare.”

The media has decided to conflate the two groups so now Limbaugh is right in seeing how they hold to their own standards. He’s also right in looking at CNN. Already, Fox News and MSNBC are acting exactly as you’d expect them to. We should watch, in the coming months, how the “down the middle” news outlets handle the two groups.

There’s plenty of future column fodder here for sure.

So, while I don’t think there’s nearly enough evidence to jump to Limbaugh’s (unsurprising) conclusion, I agree with his tactics. Lets watch and see how the media and our politicians play this.