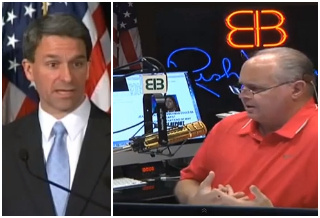 The morning after Democrat Terry McAuliffe defeated Republican Ken Cuccinelli in Virginia’s gubernatorial election, grumbling for the right has begun to suggest that the GOP essentially abandoned the tea party candidate, especially in the crucial Washington, D.C. suburbs that helped decide the race. Not only does Rush Limbaugh believe the Republican Party left their candidate out to dry, but he also knows why they did it.

“Do you realize what could have happened if the Republican establishment had supported Cuccinelli yesterday?” Limbaugh asked his radio audience. “The GOP apparently didn’t want to win Virginia because they didn’t want the tea party getting credit for it.”

In addition, Limbaugh said that the Republican Party “didn’t care about repudiating Obamacare,” which would be difficult to believe after watching Secretary of Health and Human Services Kathleen Sebelius’ second round of hearings today. “Because if there was place to plant the flag in opposition to Obamacare in the midst of this rollout,” he continued, “it was in that election. I can’t tell you how frustrating this is!”

With the “albatross of Obamacare hanging around McAuliffe’s neck,” Limbaugh said, the health care law would have gotten the blame if the Democrat had lost. “That could have caved the Democrats on Obamacare,” he said, taking the hypothetical premise to its next logical conclusion. “The Republican Party could have really dealt a huge blow to Obamacare by helping Cuccinelli win,” Limbaugh concluded, “and they didn’t.”