Rush Limbaugh: Rep. Weiner Is The ‘Poster Boy’ For The Democratic Party 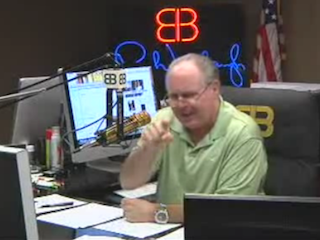 Rush Limbaugh was off yesterday and, with everything that’s happened since he last took to the microphone, we were expecting today’s broadcast would be pretty energetic. Boy, were we not disappointed. Limbaugh absolutely went off on the Anthony Weiner situation. We’ve got video and some of the best quotes below.

The main take away is that, unlike Glenn Beck, Limbaugh doesn’t want Weiner to resign. In fact, he “wholeheartedly endorses” Weiner not resigning. However, he wants Weiner to “stay strong” for some fairly pragmatic reasons. Limbaugh believes Weiner to be the “poster boy” for the Democratic party and, if said poster includes a picture of a penis, all the better.

Of course, there was so much else going on in this segment. It truly was one of those posts where I had about a billion quotes to choose from for the headline. So, I’d like to share some of my favorite moments below in bullet point form.

“Phone sex at least there’s a voice on the other end! This, texting, why it’s just absurd! You’d never catch Hugh Hefner doing this! Hugh Hefner put his pajamas on, had them over to the Mansion, and they’d go at it for real. Hugh Hefner wouldn’t show them a picture. He’d show them the real thing!”

All in all, a classic 10 minutes of Limbaugh. Give it a listen in the clip below: