Rush Limbaugh: Occupy Wall Street Protesters Probably Glad They Can Now ‘Move Back In With Their Parents’
audio

Rush Limbaugh: Occupy Wall Street Protesters Probably Glad They Can Now ‘Move Back In With Their Parents’ 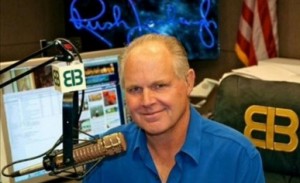 It was victory lap day over at the EIB studios today as Rush Limbaugh discussed the eviction of the Occupy Wall Street Protesters from Zuccotti Park. Clearly in a very good mood, Limbaugh accused the protesters of being rapists who would be glad to have an excuse to go home, gave their parents instructions on how to re-potty train them, and imparted his theory that the Obama White House had orchestrated the entire raid.

Here’s how he started off:

“Okay, so the good news is that the cops have finally liberated Zuccotti Park from the Occupy army, occupation army of these lousy hippies, thieves, rapists, purse snatchers, muggers who were camped out there. The bad news is that they’re now back out on the streets. And in New York who’s gonna notice the difference?

How much do you want to bet that most of these protesters are glad Bloomberg finally kicked ’em out and that the judge is letting the rules be enforced? This way all of these protesters can move back in with their parents without losing face now. They can still go back home as heroes.”

Limbaugh then compared the protesters to his dogs and instructed any parents listening that they may have to “put some newspaper down at strategic points inside the house” when their “hero sons and daughters” returned.

As for President Obama, Limbaugh used the theory that there was collusion from the mayors of various cities cracking down as a jumping point to go higher. Saying that the protests were nothing but an advertisement for conservatism, Limbaugh theorized that the President must have called the mayors up and told them to clean out the parks so as to save his reelection. That would make sense. I mean, obviously the forceful eviction of the protesters has helped make people less politically engaged.

In addition to all this, there’s also a special bonus as well! In the middle of the clip, Limbaugh explains which sexually transmitted diseases he’s heard of and which he hasn’t and demonstrates which he can pronounce the name of. Fun!