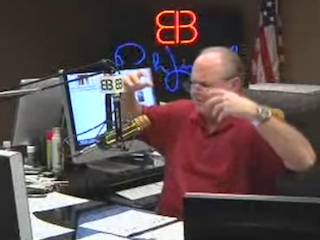 There was some talk yesterday that we had been incorrect in assigning any sincerity to Rush Limbaugh’s congratulations to President Obama over the death of Osama bin Laden. While he certainly dipped into sarcasm occasionally, we still believe there was at least a bit of genuine gratitude in there. However, whether or not that bit existed yesterday, there was no sign of it today as Limbaugh now claimed Obama, the Democratic Party, and the “American Left” all owe the country an apology. Why? Well, they kept us from getting Bin Laden sooner, of course.

His reasoning was that the Obama administration had not embraced the Bush policies that helped capture the terrorist leader and, in fact, ran on the promise of stopping them. Therefore, instead of taking any of the credit for the mission, the White House should be apologizing.

“Ladies and gentlemen, virtually every tool, every apparatus, every technique, every policy used to affect a successful mission to kill Osama bin Laden was employed by this current administration and they campaigned on undermining and destroying and ending all of it. And now they claim credit for being gutsy and courageous when none of this would have been available to them if they had their druthers?”

Limbaugh went on to bash Obama for not properly thanking President Bush and Vice President Cheney in his speech on Sunday night.

So, yeah, all of us naive people who imagined a country united by the destruction of a common, hated enemy? We totally should have envisioned the inevitable pissing match over who deserves the most credit and who got thanked enough.

Watch a clip of Limbaugh’s comments below: