Rush Limbaugh Rails Against Our “Agitator In Chief” in Epic Rant 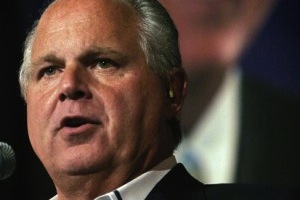 On today’s show, Rush Limbaugh had an epic rant on the continuing teachers’ union protests in Wisconsin. He railed against the protesting “agitators,” against the “cowardly” Wisconsin Democrats, but mostly against President Obama, going so far as imply that he was disgracing the memory of those killed in the Tucson shooting last month by not coming out against the unions.

He then turned his sights on the Wisconsin Senators who have fled the state to delay the budget proposals. Working from reports that they spent time in a bar, Limbaugh joked that, perhaps, they got confused and thought St. Patricks day was February 17th.

After that, he returned to Obama. It was here that he really got on a roll.

“So lets play this out now. The President wants to play petty political games with the budget, wants to shut the government down (make no mistake, he does) so that his state-controlled media can distract the nation from his economic and foreign policy failures. This country is in a mess. He promised the opposite. It is in an absolute free fall mess defined as Barack Obama’s normal. This is his comfort zone. This is what community organizers do before they remake their target. This is a political fight. It’s going to go on in state after state after state. This is a political fight the American people will win. The American people will not be distracted by Obama’s games and his failures. The American people know that Obama is not the Gipper, he’s not the Come Back Kid. They know he hasn’t moved to the center. Barack Obama is on his way to the bottom.”