Limbaugh Thinks Obama is After His Penis 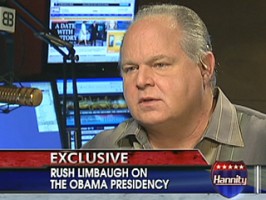 As Steve Krakauer reported on Monday, rapper Jay-Z has commenced beefs with both Fox News’ Bill O’Reilly and radio host Rush Limbaugh, telling them to “fall back” and “get off (his) balls,” respectively. O’Reilly launched his own short, not-so-sweet reply last night, but it was El Rushbo who took the cake for weirdness-of-rejoinder. Apparently reticent to engage Hova, Limbaugh instead set his sights on President Obama, accusing the Commander-in-Chief of being some sort of Dick Reaper. Here’s Limbaugh’s response:

You heard correctly. Here’s the transcript of the relevant passage:

I would remind the rapper Jay-Z, Mr. Z, it is President Obama who wants mandated circumcision. We had that yesterday. That means if we need to save our penises from anybody, it’s Obama.

I know what you’re thinking, and yes, the President does have bigger things to worry about.

From whence does Limbaugh conjure this fantasy that has him beating off Obama’s Circumcision Squad with a stick? Is there some kind of proposal afoot to slice up Rush Limbaugh’s tackle?

Apparently, he pulled the idea out of Fox News’ ass, where it then exploded across the trembling right-wing blogosphere. They take a CDC report recommending circumcision as a way to prevent the spread of HIV, and tack on a phrase, “Universal Circumcision,” that appears nowhere in that report, or anywhere else. From there, it’s off to the races for painfully dumb and/or painfully dishonest conservative blogs.

As for Rush, his panic is understandable. The government, under George W. Bush, has already gone after Little Rush once, in a way, detaining him for posessing Viagra without a prescription. Still, the odds of something like that happening again are pretty stiff.