Rush Limbaugh To Touré: ‘For 23 Years I’ve Been Told I’m A Racist. I’m Not And You Are’
audio

Rush Limbaugh To Touré: ‘For 23 Years I’ve Been Told I’m A Racist. I’m Not And You Are’ 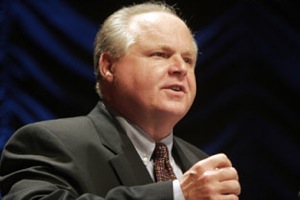 In case you haven’t noticed, in the past couple days, all of the country’s media figures have been engaged in a rousing match of their favorite board game: Race Card™! It’s the wacky game where conservatives and liberals lay their cards on the table and try to prove who has the most black friends.

This most recent round began after Politico broke the Herman Cain sexual harassment story and conservative firebrands like Ann Coulter and Rush Limbaugh rushed to blame the whole thing on an evil, racist liberal plot. Yesterday on The Last Word, Touré attacked Limbaugh (among other conservatives) for not understanding the difference between racial politics and accusations of racism. Touré seemed to suggest that Limbaugh was guilty of making and poorly thought out allegations of racism, which “muddled” the real discussion of how race is a suddenly important topic in this year’s presidential politics.

Today on his radio show, Limbaugh hit back, arguing again that, no, you guys are the racists! Gosh this is a fun game!

After playing the Last Word clip, Limbaugh asked his listeners if they had any idea what Touré was saying. He then helpfully explained what he thought the commentator was trying to say.

“What he was trying to say is, ‘They are stealing our technique. They’re stealing our technique, and they’re muddying the waters by using our technique. We’re the ones who have exclusive right to the race card! We are the ones who get to decide who’s racist and who isn’t, and when guys like Limbaugh come along and call us racists, why, that just muddies the water and makes everybody want to forget all this and leave. We own it! We own who’s a racist and who isn’t. Limbaugh can’t do that. Limbaugh and these others come along and say we’re being racist? We own that ploy!'”

I wouldn’t want to speak for Touré, but something tells me that he’d disagree that that was his message.

Limbaugh continued by claiming that Democrats were also angry that, after all these years, he was still around fighting the good fight:

“I’m very uncomfortable answering this but they’re still ticked off that I’m a factor. What they’re really mad at here is that somebody or a group of people on our side in the media could maybe save whoever it is they go out to destroy.

For 23 years we’ve been hearing it. Maybe not from you, [ Touré], but people all over your side of the aisle. For twenty-three years I’m a ‘racist;’ and I’m not, never have been. You guys are. We say it. You don’t like it. Yeah. Exactly.”

Isn’t Race Card™ such an awesome game? It’s like tennis. Back and forth, back and forth, I’m a racist, you’re a racist. Forget baseball. This is the great American past time.