Arguing that Boyle’s reporting has a racial undercurrent, Walsh’s post is entitled: “How not to seem like a racist: A tip for right-wingers angry about charges of racial bias: Try treating the Obama daughters with decency.”

Walsh’s general theme, and explicit advice she repeats, is: “Try treating his [Obama’s] daughters with respect.”

Walsh goes on to decry various recent reports concerning the First Daughters, noting that “[r]eporters don’t write about minor first chidren except when they’re attending ‘official or semi-official events’.” She then quotes the Washington Post‘s Paul Farhi’s writing on the subject last year:

The ban on such coverage has existed through many administrations by informal agreement with the White House Correspondents’ Association, which represents the interests of journalists who cover the president.

“There’s a general feeling among the press corps that it wants to be respectful” of the president’s children, said Caren Bohan, the White House reporter for Reuters who is president of the WHCA.

In the viciously worded article, Walsh not only refers to Boyle as “untalented” but quotes Esquire‘s Charles Pierce’s recent post describing Boyle as “that pudgy little monster.”

And, one might very well walk away agreeing at least with Walsh’s theme that reporters should all treat presidential “daughters with decency.” Fair enough. Except — oh, wait… there’s this: 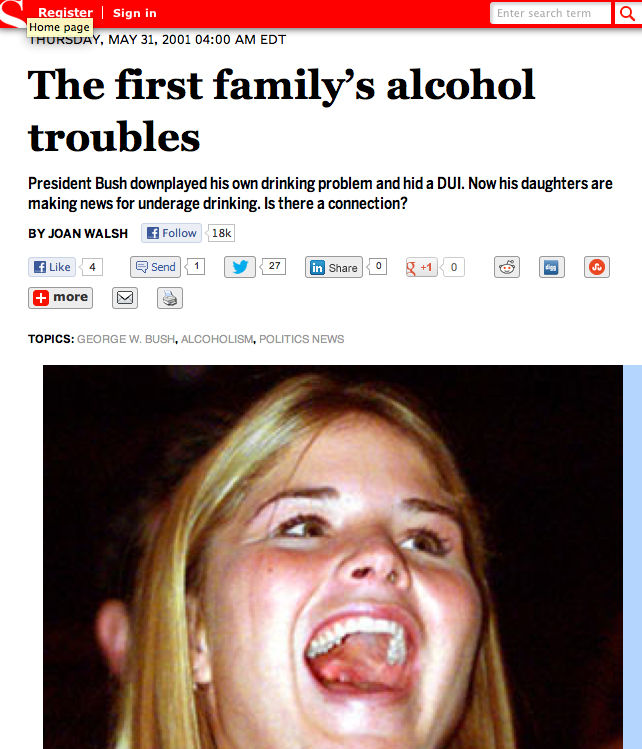 That’s right. The very same Joan Walsh, who today rails about the need to show POTUS’s daughters “respect” and “decency”, in 2001 penned an article for Salon implying that Jenna Bush, a teenager at the time, may have a drinking problem.

Starting off with the thoughtful question, “President Bush downplayed his own drinking problem and hid a DUI. Now his daughters are making news for underage drinking. Is there a connection?“, Walsh then noted: “There’s no evidence either twin has a drinking problem, but the string of news items involving their partying and scrapes with the law in the last few months can’t be ignored.”

Lest Walsh’s readers have to actually seek out these unsavory reports, Walsh oh-so-helpfully provided a thorough recap:

“First came the tale of Secret Service agents ferrying home Jenna’s boyfriend after he was arrested for public drunkenness. Then there were randy National Enquirer photos of Jenna, a University of Texas freshman, and a beer-drinking pal, and a story about her alleged marijuana use. Yale freshman Barbara, supposedly the studious twin, had a false I.D. confiscated at a New Haven, Conn., bar. In April, the Enquirer featured a lurid tale of Barbara’s drunken spring-break binge in Mexico, and by the end of the month all major newspapers were carrying a story about Jenna being cited by police at an Austin bar for underage drinking, while Secret Service agents waited outside.”

Walsh, to be sure, noted that “[Barbara and Jenna’s] college drinking doesn’t mean they’ll turn into alcoholics as adults” (phew, thanks for adding that obvious caveat, Joan) but also noted: “Still, their recklessness in the first months of their father’s presidency suggests their parents screwed up by downplaying and even denying President Bush’s own drinking problem.”

(And any argument based on Sasha and Malia being minors, while Jenna was technically an ‘adult’ at the time of Walsh’s 2001 story, is purely semantics. Few could posit that a 19-year-old First Daughter does not deserve the same respect accorded to one under the age of eighteen).

So, in The-World-According-to-Walsh, Boyle’s reporting on a taxpayer-funded vacation (noteworthy, in light of the White House citing Secret Service costs in shutting down tours of its premises) reeks of racism and is wholly inappropriate … but reporting on a teenage girl’s partying in detail and implying she may have possibly inherited her father’s drinking problem? A-okay.

What’s that you say about ‘decency’ towards POTUS’s daughters, Joan? Perhaps a column on double-standards should be next on your list.