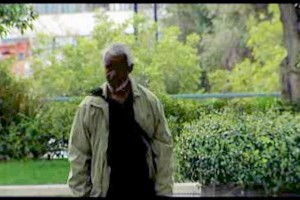 Earlier this afternoon, a man with a knife stood outside San Diego police headquarters shouting anti-gay epithets and antagonizing police. He was surrounded and a lengthy standoff ensued. Eventually, he made a movement towards the officers, and they shot him. This all went out on a live feed on KFMB-TV CBS 8’s website. Only after the shooting did the news crew learn that the man was shot with non-lethal bullets meaning he didn’t get much more than a lot of nasty bruises. However, until that confirmation, it seemed like a man had just been blown away with shotguns and a news site had aired it all live.

More and more, television news outlets are using the Internet to stream live footage of events like this. Not only do they not have to worry about the length of something like a police standoff, they also don’t have to worry about FCC or censor issues when it comes to profanity or violence perpetrated by those involved. But it does open up some ethical concerns.

Obviously, this is nothing new. Since the advent of live entertainment, the possibility of a disaster has one of the biggest draws. People love when Saturday Night Live cast members break character during a sketch. And this holds doubly true when the risk is actual violence and not Bill Hader giggling. People are going to the Spider-Man musical in droves hoping (even if it’s in the back of their minds) that they’ll see a swinging actor fall. Shocking NASCAR crashes get just as much attention as shocking NASCAR wins. And television news has been airing live car chases for decades. And, before we knew that Balloon Boy wasn’t actually in said Balloon, every network in the country had a live feed of its flight on the air, opening up the possibility that, at any moment, audiences might see a little boy fall to his death.

However there is a difference with the Internet. Unlike television, these live feeds never cut away. In today’s instance, Internet audiences would have had to keep watching for 10 whole minutes before they learned that they didn’t actually watch a guy get killed. That never would have happened during an actual news show. And, through the magic of social media, it’s possible for these feeds to get tons more viewers than said shows would ever hope to get through the Internet. Just think of all the tweets being sent out alerting people that “something’s happening” on the KFMB-TV’s website.

Is this a good or bad thing? It’s obviously not the job of news outlets to sugarcoat the truth. Ask nine people out of 10 and they’ll tell you they want the news straight and as it is. But, should these live feeds begin employing some of the techniques that their television counterparts use? A delay? Warnings?

I’m not asking because I have an answer to this. As much as I find it queazy that a man getting shot would air live like that, I also realize that, in this world where only opinion-based news can bring in the ratings, raw footage of a newsworthy event is as unbiased as the media can get. I ask because this appears to be the Digital Age evolution of one of the oldest questions in the world of news; When something does or can go wrong, what do you show?

Watch some of the clips (the shooting and the conversation about the weapons) from KFMB-TV CBS8, San Diego’s feed below: