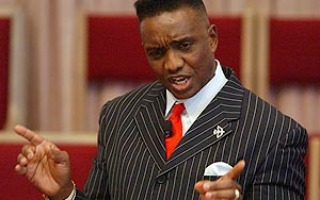 Rev. O’Neal Dozier — whom you might remember as the Christian pastor and Rick Santorum supporter who once said that homosexuality “makes God want to vomit” — held a press conference today asking Santorum rival Mitt Romney to renounce his Mormon faith. Like you do.

Rev. Dozier’s primary issue with the Mormon religion, according to the press release he circulated today, is what he views as its history of racist and xenophobic practices. “The Mormon religion is prejudiced against Blacks, Jews and the Native American Indians,” he writes. “These allegations are substantiated and validated by the writings of the former Prophets and Seers of the Mormon Church.”

RELATED: Santorum Supporter Rev. O’Neal Dozier On CNN: ‘God Is Not A Socialist’

This will likely prove a difficult battle for Rev. Dozier given that 1) past attempts at getting people to renounce their belief systems have, for the most part, been rather difficult, and 2) the pastor’s own faith and interpretation of scripture have been marked by controversy and allegations of prejudice as well. Those who live in glass houses, as they say, should be careful of casting the first stone. Or something like that, no?

Black Clergy and other concerned Christians ask Governor Mitt Romney to renounce his racist religion:
On Monday, March 12, 2012 at 11:00 a.m. Rev. O’Neal Dozier and a group of concerned Clergy and other Christians will hold a News/Press Conference to publicly ask Republican Presidential candidate, Mitt Romney to openly renounce his racist Mormon Religion.

The purpose of this request is to foster and maintain good race relations here in America.

The Mormon religion is prejudiced against Blacks, Jews and the Native American Indians. These allegations are substantiated and validated by the writings of the former Prophets and Seers of the Mormon Church. The Mormon Church says that the Book of Mormon is “the most correct book, even more correct than the Bible.” The Book of Mormon in 2nd Nephi, Chapters 5:21-23 accuses God of cursing African people and causing them to have black skin in order for them not to be attractive to white people. These verses also accuse God of causing the black African people to be disgusting and detestable to white people.

Furthermore, these verses accuse God of being against inter-racial marriages between blacks and whites. The Mormon Prophet, Brigham Young in the (Mormon) Journal of Discourses further degrades black African people by saying that they are uncultured, unattractive, unpleasant, low-life, wild and unintelligent. Prophet Brigham Young further states that “if the white man who belongs to the chosen seed mixes his blood with the seed of Cain (black person) the penalty under the Law of God is death on the spot.” Also, according to Mormon Doctrine, Native American Indians were also of the class of the cursed because their skin was also a darker color. Both Alma 3:6 and Mormon 5:15 of the Book of Mormon degrade the Lamanites, which are the Native American Indians in the same way they do black African people. The Mormon Church is also prejudiced against the Jews. In the (Mormon) Journal of Discourses, the Mormon Prophet, Brigham Young railed against the Jews in a very hateful way when he said, “I would rather undertake to convert five thousand Lamanites (Native American Indians), than to convert one of those poor miserable creatures (Jews) whose fathers killed the Savior… yes, I would rather undertake to CONVERT THE DEVIL HIMSELF, if it were possible… I would say, leave them and come home, the Lord does not require you to stay there, for they must suffer and be damned…leave them to live and die in their sins and ignorance…they take pleasure in their wickedness… (Mormon Journal of Discourses).