Sarah Palin: If I Become A Distraction I Won’t Run For President 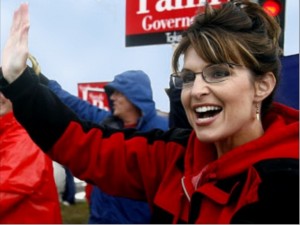 Wow. While this probably won’t be the Sarah Palin radio quote that gets the most attention today, it might actually be the most interesting. In a humble and self-aware moment, Palin told Sean Hannity that she might actually not run for president if she fears that all the attention she’s gotten through reality television and her beef with some of the Republican leadership has become a distraction and might hurt the chances of obtaining her real stated goal: stopping the Obama administration.

“I want to be realistic about this. I want to offer myself up in the name of public service if I can do good and if the debate can be centered around those things that Americans should be talking about. Now I realize that I’m an unconventional potential candidate and, because of that, I don’t want to be speculated about – whether I’m gonna run or not – if all it does is kind of gin up controversy and superficial, ridiculous items to talk about, as we’ve seen in the last couple of weeks, and get people distracted from the important issues that Americans need to be discussing as we go into the 2012 election to unseat Barack Obama.”

These quotes are kind of brilliant for any number of ways. First off, Palin can point to them as a prediction of any criticism she may get in the future for her television series or mistakes she may make like the one this morning. More importantly though, if she does eventually drop out of the race, either to pursue other options (of which she has a great many) or because she doesn’t think she can win, this gives her a perfect and noble excuse. “Oh, Sarah Palin isn’t leaving the campaign trail because she’s not electable, she’s doing it for the good of the country.” It’s just like when she left her governor’s position and sent out a bunch of quotes about being better able to spread her message by being in the contiguous US.

Of course, those are cynical views as to why she made these statements. There’s always, of course, the good possibility that she had no ulterior motives for saying this, that this was just her genuine feelings. As such, it shows a much more thoughtful and insightful view of the political landscape and her place in it than her usual comments. Either way, this was a very smart thing to say.

Palin may have mixed up South and North Korea on Glenn Beck’s radio show today, but on Sean Hannity’s show yesterday, she sounded like a true politician.