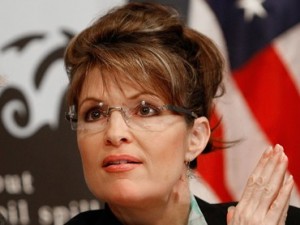 Sarah Palin, apparently taking a page from General Petraeus and Hillary Clinton (and Glenn Beck), decided it was time to weigh in on the Koran burning pastor. She thinks it’s wrong. In fact, she thinks it’s just as wrong as building a mosque in Lower Manhattan, something she drew the nation’s attention to back in July via her inimitable Twitter account. From her Facebook page:

Book burning is antithetical to American ideals. People have a constitutional right to burn a Koran if they want to, but doing so is insensitive and an unnecessary provocation – much like building a mosque at Ground Zero.

Yes it is exactly like building a mosque in Lower Manhattan. Before we continue with Palin’s note, let’s turn for a moment to Gail Collin‘s op-ed today:

The Koran-burning has been equated, in some circles, with the fabled ground zero mosque. This is under the theory that both are constitutionally protected bad ideas. In fact, they’re very different. Muslims building a community center in their neighborhood on one hand. Deliberate attempt to insult a religion that is dear to about 1.5 billion souls around the globe on the other….There is nothing you can do about the crazy 5 percent except ask the police to keep an eye on them during large public events, where they sometimes appear carrying machine guns just to make a political point about the Second Amendment. And, in situations like a Koran-burning, make it clear that the rest of us disagree.

Meanwhile, Sarah Palin, who has taken every opportunity to latch onto the proposed Lower Manhattan mosque and turn it into a national calamity — when last we checked it she had labeled it the ‘9/11 mosque’ as though it was being built as some tribute to the day — has this cautionary warning for Koran-burning Pastor Jones:

I would hope that Pastor Terry Jones and his supporters will consider the ramifications of their planned book-burning event. It will feed the fire of caustic rhetoric and appear as nothing more than mean-spirited religious intolerance. Don’t feed that fire.

Hard to argue with her there…where “caustic rhetoric” is concerned Palin knows whereof she speaks. You can read the full note here. Alternately title: Sarah Palin does her own rendition of ‘We Didn’t Start The Fire.’