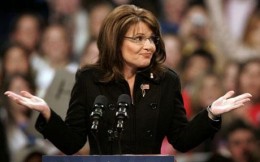 Sarah Palin, who just last week explained to an angry Alaskan that the reason she had left her job as Governor of Alaska was so that she could be out there “fighting for Americans to be able to have the Constitution protected so that we can have free speech” apparently only meant appropriate free speech.

On Friday President Obama came out and publicly supported the building of the mosque in Lower Manhattan in so far as he believes “Muslims have the [same] right to practice their religion as anyone else in this country” as stated in the First Amendment to the Constitution. And then expanded on the remarks yesterday saying he wasn’t weighing in on the wisdom of the decision, merely their right to do so.

This was not enough for Sarah Palin, someone who has been a vocal refudiator of the plans to build the mosque, responded thusly on Facebook:

Mr. President, should they or should they not build a mosque steps away from where radical Islamists killed 3000 people? Please tell us your position. We all know that they have the right to do it, but should they? And, no, this is not above your pay grade. If those who wish to build this Ground Zero mosque are sincerely interested in encouraging positive “cross-cultural engagement” and dialogue to show a moderate and tolerant face of Islam, then why haven’t they recognized that the decision to build a mosque at this particular location is doing just the opposite? Mr. President, why aren’t you encouraging the mosque developers to accept Governor Paterson’s generous offer of assistance in finding a new location for the mosque on state land if they move it away from Ground Zero? Why haven’t they jumped at this offer? Why are they apparently so set on building a mosque steps from what you have described, in agreement with me, as “hallowed ground”? I believe these are legitimate questions to ask.

Emphasis mine. Palin is apparently discovering that protecting the Constitution is tricky business. Since the Constitution exists and subsequently mainly comes into play in instances when people’s rights are out of whack with current public sentiment, upholding it can often mean taking and unpopular position. Also, does anyone else get the sense Palin is running a bit out of steam on this issue?
Update: Probably not. Ben Smith at Politico has penned a smart piece today on how “Republican leaders have largely abandoned former President George W. Bush’s post-Sept. 11 rhetorical embrace of American Muslims and his insistence — always controversial inside the party — that Islam is a religion of peace.” Meanwhile, the builders of Park51 are apparently open to discussing Gov. Patersons’ alternate location suggestion.

Meanwhile, despite Robert Gibb‘s assertion a few weeks back that this was a local issue, Obama apparently fully intended to weigh in all along: ““We had no illusions about this. He didn’t take this on as a political strategy. He took it on because it was a matter of fundamental principle.”