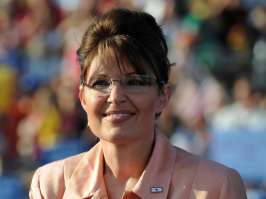 Is there anybody alive on the planet better at whipping up catchy political slogans than Sarah Palin? The woman is really unmatched in her ability to sum up national issues in one line or less. Today’s contribution to the political conversation comes, as per usual, via her Facebook page. It is about the Arizona Immigration law, and while she makes no direct mention of it I imagine she was re-inspired to weigh in on the controversy after a national poll revealed that almost 75% of the country supports the law. Here’s what she had to say:

Let’s respect the hardworking, accomplished legal immigrants who sacrificed much, contributed selflessly, and helped build America into the greatest melting pot on earth! We need to understand the importance of America’s fair immigration laws.

Erasing U.S. borders will destroy our country as we become less safe – and this national security issue is what Arizona and other border states are addressing with reinforcement of federal immigration laws. They have to do it because the feds aren’t doing it.

I spoke with Arizona Governor Jan Brewer yesterday, and she reminded U.S. citizens that, despite President Obama’s ignoring this grave national security threat, his dismissal of the need for border security is no laughing matter – and it’s being used as a political tool to divide her state along racial lines.

Log on to securetheborder.org to learn more and show your support for our sister state of Arizona!

We’re all Arizonans now and we say with clear unity: “Mr. President, do your job. Secure our border.

Leaving aside the fact that it’s a bit rich to hear the woman who coined the term “death panel” complain about either the president or the media “twisting reports” on the content of any bill, Palin has likely just managed in 212 words to paint in broad strokes the GOP’s mid-term immigration platform. No doubt political campaigns across the country are trying to figure out how to turn this “note” into a campaign commercial as we speak. On a related note: I can’t understand why Palin, or one of her PAC’s hasn’t launched a t-shirt company to capitalize on these bon mots.

Mr. President, do your job. Secure our border [Facebook]