Even though President Trump doesn’t have any plans for a formal one-on-one with Saudi Crown Prince Mohammad bin Salman at the G20 in Buenos Aires, they apparently encountered each other at the top of the summit.

While it isn’t clear yet in terms of what was said or what exactly happened, the two bumped into each other during the welcoming ceremonies. Treasury Secretary Steve Mnuchin shook the prince’s hand as he accompanied the president, and Trump appeared to offer a few words during the exchange. 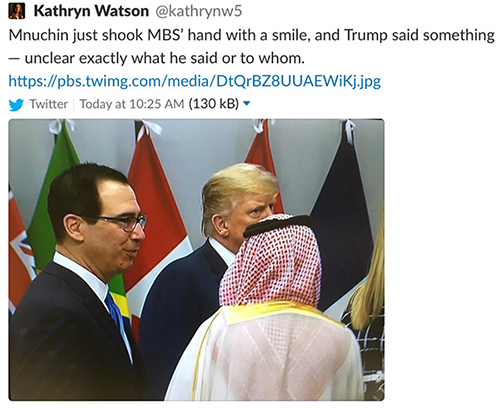 This has been Trump’s first encounter with Salman since announcing that he was taking the crown prince’s side on the death of Jamal Khashoggi. Trump has accepted Salman’s denial of involvement in the killing, embraced Saudi Arabia’s disparagement of Khashoggi as an “enemy of the state,” and he has disputed the CIA’s “high confidence” assessment that the prince ordered the writer’s execution.

Khashoggi’s death drew new attention this week due to questions about why CIA Director Gina Haspel didn’t appear before Congress to assist with their briefing on the Saudi Arabia situation. Despite the lasting international outrage over the murder, Salman is still drawing attention at the summit, judging by this warm handshake of his with Vladimir Putin.

Trump cancelled formal meetings with Putin over Russia’s seizure of Ukrainian ships and sailors, though various reporters have suggested that the two leaders might have a close encounter of their own at some point.