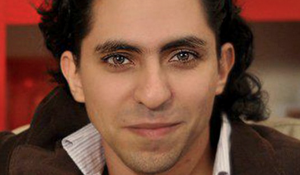 As reported here last week, Saudi blogger and activist Raif Badawi was sentenced to 1000 lashes and 10 years in prison for the crime of criticizing Saudi Arabia’s government and insulting Islam. The barbaric and inhumane flogging began last week in a public square, as Mr. Badawi absorbed 50 lashes to his back and legs, which battered him to the point of landing him in a local hospital, according to the Associated Press. Badawi also reportedly did not cry out during the flogging, which occurred while his hands and feet were shackled.

Yup…only 19 weeks and 950 flogs to go before spending the next decade in a Saudi prison, which makes Shawshank look like a South Beach Sheraton. The flogging has sparked outrage internationally from human rights groups like Amnesty International (the American media has covered it, albeit sparingly). But now a bit a good news: According to the BBC via Badawi’s wife (who lives in Canada with their three children), the 90-year-old King of Saudi Arabia (King Abdullah) will now refer his case to that country’s Supreme Court. Her hope is authorities will withdraw his punishment.

Now…where this goes from here is anybody’s guess. Know this: The Saudi government sees what’s happening in the region (Egypt, Libya, Tunisia, Syria, etc.) via the wave dubbed the Arab Spring and wants to avoid the same revolt festering inside of its borders. But if they’re smart, the clerics who rule should quickly realize that continuing this ludicrous punishment with the world watching will only foster even more disgust for that government, which is as totalitarian as North Korea–but has lots of oil–which forces Western governments and particularly the U.S. to look the other way regardless of who occupies the White House.

How totalitarian in Saudi Arabia? Here’s eight fun facts to consider the next time you’re planning an overseas trip:

– Men and women can’t socialize in public with each other
– Camera phones are forbidden
– No walking of dogs in public parks in the capital
– Women are prohibited from participating in sports
– Women are prohibited from driving (except when doing so in a desert or private compound)
– Valentine’s Day is banned (because it isn’t an Islamic practice). Red may not be worn on February 14th, and red roses are banned from being sold in flower shops on that day
– Non-Muslims are forbidden to publicly worship other gods or even possess crosses, bibles, etc., not approved by Islamic law
– Free speech is…well…you know the rest

So now Badawi may (may) avoid those final 950 lashes, which is basically death by torture. However, even if that happens, it likely won’t keep him out of prison and not seeing his three children until they’re fully grown…all for for the crime of expressing an opinion. His lawyer would try to assist in keeping the flogging from continuing, mind you, but he was sentenced to 15 years after arguing too strenuously for his client. No, really…

As for Saudi Arabia’s hopes of softening even a hint, here’s what happened there Monday in the holy city of Mecca: A woman was beheaded sans pain killers (which human rights group say at least should be provided) in a public square there courtesy of a Saudi court. Laila Bint Abdul Muttalib Basim–a Burmese woman who lived in Saudi Arabia–was executed by sword after being dragged to her death by four police officers who also held down during the beheading. It reportedly took three strikes to finish the execution. Ms. Basim–who pleaded not guilty right up until her death–was convicted of the sexual abuse and murder of her seven-year-old step-daughter. The video of the beheading has since been removed from YouTube.

It’s been a tough month for human rights and free speech. Badawi, Basim both suffered different forms of brutality; one inhumane, one fatal…but the song remains the same:

As long as the oil keeps flowing, the United States government–Republicans and Democrats alike–will mostly simply pretend none of these atrocities are actually happening.