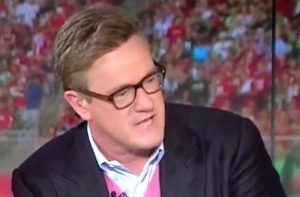 After New York Times reporter Maggie Haberman posted an image of MSNBC host Joe Scarborough at a New Year’s Eve party with Donald Trump, Scarborough went on a Twitter rant accusing her and her colleague Sopen Deb of smearing him.

Monday’s tweetstorm comes after an argument over the weekend when Deb posted a screenshot of Haberman’s story and claimed Scarborough “partied” with Trump. Scarborough claimed he and his co-host Mike Brzezinski stopped by to discuss a potential interview. That argument, however reared its head again when Haberman tweeted out the image.

More: Maggie Haberman did not try to contact me before putting me in a story saying I was a “reveler” at Trump’s NYE party. I was not. https://t.co/8AxPlkjZpH

Haberman in particular was confused, pointing out that Scarborough said he didn’t have a problem with her story earlier.

@JoeNBC You said on Twitter last night you had no issue with the story. Did something change?

Btw, my issue is not with your story. It’s with the mischaracterization of it by someone else that we were “partying.” All good. https://t.co/P0C0Wr8ypk

Still, Scarborough insisted that Haberman should have called him before writing that he was a “reveler” at Trump’s party. [Note: Haberman’s story actually only said Scarborough was at the party, and never described him as a “reveler”]

Several reporters said you should’ve called to confirm I was a “reveler” at a party I did not attend, was not invited to & not dressed for. https://t.co/OZXRI7HyKg

I do have an issue with one NYT reporter painting me in a false light without calling me, & a future NYT reporter adding another false fact. https://t.co/OZXRI7HyKg

Your editor should as well. https://t.co/KnsGJ8hnkx

@JoeNBC You’re in a photo standing among revelers. I’m not sure what’s inaccurate. I also didn’t and don’t think it’s a big deal.

Pick. Up. The. Phone. And. Ask.
I’m went where the USSS directed me to the foot of the stairs. I’m standing with the PEOTUS going upstairs. https://t.co/KTD4BpcZdo

Oh, you’re back. What’s your lie of the day? https://t.co/HAh9BBVwpP

You get caught lying then double down and triple down. You know the truth and yet you just can’t stop sending out snide tweets. Wow. https://t.co/HAh9BBDVyh

Note to NYT Editors: this is Day 2 your future employee sends out misleading tweets. Today, its worse bc he knows the facts but continues. https://t.co/HAh9BBDVyh

Scarborough even wrote some pointed tweets directed at his own colleague Chuck Todd.

It really stinks to watch others continue help ruin the reputation of your industry. But fighting each other about only hurts the democracy

Yes. I find that people misrepresenting others and lying is indeed corrosive. I know you agree with me that facts matter. https://t.co/qnvDt6xwg6