Scarborough & Hannity Can Run From their Trump Boosterism, But they Shouldn’t be Allowed to Hide
Opinion

Scarborough & Hannity Can Run From their Trump Boosterism, But they Shouldn’t be Allowed to Hide 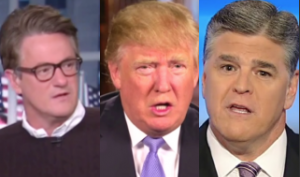 One of the many signs that Donald Trump is going to lose this election (possibly very badly) is that some of his biggest media supporters/enablers are already starting to either jump ship, or to dive for cover from the inevitable blowback from his defeat. The two best examples of this so far are Joe Scarborough and Sean Hannity.

These two “conservative” TV hosts have handled Trump in different yet similar ways, and both have played key roles in how we got to where we currently are. Now, they are each clearly trying to avoid, also in distinct fashion, paying the price for their important respective parts in this looming disaster.

Scarborough, a former Republican congressman, has hosted two very different shows at MSNBC in his television career (I have been a guest numerous times on both versions). When he was on in the evenings, he was a true-blue conservative. When he moved to the mornings, and after the network made an obvious decision to become the “left-wing” cable outlet, Scarborough suddenly, and surely by coincidence, became the equivalent of a Republican “Uncle Tom.”

He was embraced by the liberal media as a darling by being a “smart” Republican who almost always bashed conservatives. Interestingly, his talk radio show, on which he tried to still be more conservative, crashed and burned in very short order.

During this cycle, Scarborough jumped all over the Trump ratings wave and rode it almost all the way to the convention. He had Trump on as a guest constantly and almost never harshly confronted him and bragged often about having predicted Trump’s success early on. He and his “co-host” Mika Brzezinski were even caught on tape kissing Trump’s ass in spectacular fashion during commercial breaks.

However, now that Trump is the GOP nominee, and the last possible obstacle to his network’s clearly favored candidate, Hillary Clinton, taking the White House, Scarborough’s tune has dramatically changed. The radically harsher tone toward Trump has also, purely by “coincidence,” corresponded with Trump no longer appearing on the show. After all, if Trump is going to stop providing him with easy access and ratings, why should he reciprocate with super-soft coverage if he isn’t going to get anything out of it, and it no longer fits with the obvious political agenda of his bosses?

Scarborough’s clear turn on Trump culminated this week with his supposedly dramatic revelation, from an unnamed source, that “several months ago” Trump had asked several times during a security briefing, “why can’t we use nuclear weapons?”

Forgetting the fact that Scarborough wasn’t there, and that one unnamed source from a non-reporter who has proven himself as a ratings whore is hardly credible, there is an even bigger question here (which even Megyn Kelly of Fox News is now asking). Why in the world was Scarborough effectively helping Trump win the GOP the nomination (as he still was “several months ago”) if he supposedly knew that he was so obviously unfit to be president?

The only remotely logical answer is that Scarborough didn’t even care because, like most TV hosts, all he is concerned with is what is favorable for him on that given day, which is determined almost solely by what is good for his ratings and provides easy content. The idea of what was best for his former party, or even the country, never even entered into his calculation (until it was suddenly in his self-interest to pretend that it was once Trump was safely nominated and no longer doing his show).

Hannity’s situation is different, but at least as illuminating of what it was that really allowed Trump to complete his coup of the Republican Party, and virtually ensure Hillary’s election. Sean (on whose show I appeared a couple of times in the “Hannity & Colmes” era) didn’t just “date” Trump for his ratings, he fell in love hard and fast.

Contradicting nearly everything he had claimed to believe in for years, Hannity quickly became an open booster for a guy who is not remotely conservative, nor qualified for the position he seeks. Not only did he have him on his show constantly, but he practically provided Trump with the “correct” conservative answers whenever he sensed he might be confused or on shaky ground. He also attacked Trump’s opponents, real conservatives whom he had previously praised, constantly.

As I have written about previously here, I believe Hannity was simply the worst offender, of many in the conservative media, who decided, consciously or subconsciously, to sell their soul for Trump ratings gold. It should also be noted that the likes of Hannity and Rush Limbaugh just recently had contracts renewed, in the aftermath of the primaries.

In my view, Hannity’s career (especially now that Roger Ailes is effectively out at Fox News) should be more vulnerable than any other “conservative” to the enormous anger his customers should feel toward him once they realize he’s duped them into following a false Messiah who is allowing Hillary to win a presidential election she has no business winning.

Even Hannity, while he is not at all a bright guy, seems to be able to see this handwriting on the wall, and appears to be already desperately concocting a narrative to protect himself from the attacks which will be coming his way. Yesterday he went on a rant in which he acknowledged Trump could lose (wait, what?!), but that this would be the fault of the GOP “establishment” for not having properly supported him all along.

Not only is this factually laughable (RNC head Reince Priebus, among others, has been FAR too supportive of Trump from the very beginning), but logically insane. Hannity is the guy who married the obviously wrong girl, and now wants to try to blame his buddies, who tried to tell him she clearly wasn’t the right one.

The reality here is that any conservative media member who backed Trump and claimed that, in a “normal” world, Trump could reasonably win a presidential election was either a complete moron or a lying, ratings-driven fraud.

Either way, if there is any justice left in the media, both will be punished severely.