Scarborough: ‘The World Is Safer with Assad in Power’

Scarborough: ‘The World Is Safer with Assad in Power’ 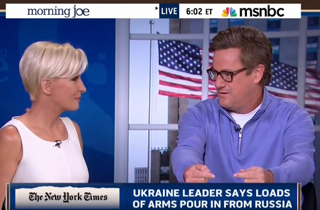 While talking about the outrage over President Barack Obama‘s seeming lack of a plan to deal with Syria and ISIS, Joe Scarborough offered up a surprising defense on Morning Joe: first, it would make no strategic sense for Obama to tip his hand to his enemies, and second, that we may have to just keep dealing with Syrian President Bashar al-Assad for a very long time.

“If I were about to attack another country,” Scarborough mused, “I’d say, “‘You know what? We don’t have a strategy. We are still working it out.’ Then I’d go over and say ‘Scramble the jets.'”

Thinking long-term, however, Scarborough questioned the potential consequences of attacking Assad and ISIS. “If we bomb ISIS, we strengthen Assad. If we strengthen Assad, what does that mean for the last two years of foreign policy?” he asked rhetorically, then answered his own question:

The world was safer with Saddam Hussein in power. The question now is, ‘Is the world safer with Assad in power?’ Guess what? Americans are safer. If we have to choose between Assad and ISIS, we’re safer with Assad there. If you have to bomb and kill ISIS leaders and that helps Assad, right now, we don’t really have much of a choice. Assad doesn’t want to blow up buildings in Washington, does not want to kill Americans. He is a thug. He is horrible. He’s killed 200,000 of his own people and he is absolutely miserable. ISIS will do much worse.