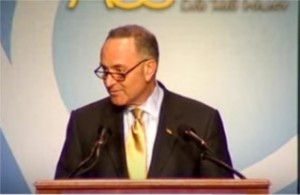 Sen. Chuck Schumer hit back at Republicans and conservative pundits who have sought to use his 2007 speech criticizing conservative appointees to the Supreme Court against him.

Only an hour after Justice Antonin Scalia‘s death was confirmed, Senate Majority Leader Mitch McConnell issued an outright, pre-emptive rejection of any nominees to the Supreme Court that President Barack Obama might name in his final year in office. Schumer rebuked Senate Republicans in an appearance on This Week Sunday, calling it “obstructionism” and an abnegation of duty.

It was at this point that others unearthed a speech Schumer gave before the American Constitution Society in 2007, in which he seemed to contradict his own position, at least when a Republican executive was in office. (See Alex’s piece from Monday: “You’ll Be Shocked to Learn That Chuck Schumer Is a Massive Hypocrite.”) In his remarks, the Democratic senator from New York argued that, given the “limited usefulness” of the confirmation process, and the “obfuscation” of George W. Bush‘s nominees’ records he observed in the hearings, he and his colleagues “should not confirm any Bush nominee to the Supreme Court except in extraordinary circumstances.”

“Even a quick perusal of the speech shows it provides no cover and that Leader McConnell is comparing apples to oranges,” Schumer wrote in his statement released Tuesday. He continued:

What I said in the speech given in 2007 is simple: Democrats, after a hearing, should entertain voting no if the nominee is out of the mainstream and tries to cover that fact up. There was no hint anywhere in the speech that there shouldn’t be hearings or a vote. Only that if after hearings and a vote, Democrats determined that the nominee was out of the mainstream and trying to hide it, they should have no qualms about voting no. Nor was there any hint that this idea that Democrats should oppose hard right ideologues should apply only in the fourth year of the president’s term. In fact, I said it should apply to this president, George W. Bush, or any future president whenever they nominated such a candidate.

In his 2007 speech, Schumer said that in the confirmation hearings for Justice Samuel Alito and Chief Justice John Roberts, senators on the judiciary committee had been “sold a bill of goods by two hypersmart and well-coached nominees who artfully exploited a confirmation process ill-suited to lay bare their genuine judicial philosophy.” He recommended more careful scrutiny of nominees based on their merits, rather than their promises; their “concrete paper record,” rather than their “pleasant platitudes” and rhetoric.

You can view the complete speech below:

Alito and Roberts were “masterful,” he said, in their public statements, in which they sold themselves as “guardians of stability,” loyal to the principles of adherence to precedent and “judicial modesty.” These selling points, he argued, were not borne out by their decisions: Rather than uphold stare decisis, as they claimed they would, Alito and Roberts “appeared to jettison decisions recently authored by their immediate predecessors” and “flouted precedent,” Schumer said.

In his 2007 remarks, Schumer expressed disappointment that he did not filibuster Alito’s appointment (in fact, he said it was his greatest disappointment from that congress). But he did not propose an ipso facto filibuster of simply any potential Bush nominee; compared to McConnell’s unyielding stance, he modestly urged that the Senate should “reverse the presumption of confirmation” and that nominees must “prove by actions, not words, that they are in the mainstream, rather than we have to prove that they are not.”

McConnell speaking on Saturday was more unequivocal: “The American people should have a voice in the selection of their next Supreme Court Justice. Therefore, this vacancy should not be filled until we have a new president,” he said.

In his statement published Tuesday, Schumer noted, “Everything I said in 2007 holds true today: It is the Senate’s duty to hold hearings and vote on the nominee based on the merits. And it is fair to evaluate a nominee based on his or her record.”

I believe in this case the President will nominate a mainstream candidate who can and should earn bipartisan support. But whether Republicans agree or not with my evaluation of whichever candidate the president puts forward, they have a constitutional obligation to hold hearings, conduct a full confirmation process, and vote on the nominee based on his or her merits. That’s what I said then, that’s what I believe now, and that’s what I hope happens in the months ahead.

In short, Senator McConnell’s attempt to justify his unprecedented obstruction with my speech is completely misleading and patently false.

“We should have done our job better,” Schumer said in 2007. The operative words being “our job.”

[image via screengrab from Schumer’s 2007 speech]