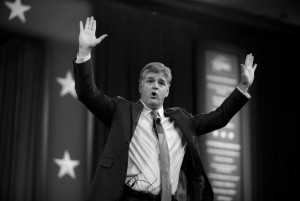 I wrote last week about how Joe Scarborough and Sean Hannity, in different but similar ways, are attempting to take cover from blowback for their obvious promotion of Donald Trump during the primaries. Since then both have doubled, if not tripled, down on their desperate attempts to re-write history and absolve themselves from blame for the coming general election disaster.

Hannity ramped up his attempt to create the (absurd) narrative that it is the “Never Trump” Republicans who will keep Trump from winning and hand Hillary the keys to the White House. He did so by naming several conservative leaders who have refused endorse Trump for president.

Among the many he cited were Mitt Romney, Jeb Bush and Ted Cruz. He called them “crybabies” who are playing a “stupid game” and “sabotaging” the election. It is they, he claims, who will be personally responsible for everything Hillary does in office. However, if you look up “projection” in the dictionary (Sean may need to) it is clear that this is exactly what Hannity is doing.

There are several elements to this which are overtly ridiculous. The first is that Hannity suddenly seems panicked that Trump is going to lose (he should be). How is this even possible? He and his favorite candidate have promised many times that Trump would not only win, but he would win “big.” It’s only August! Don’t tell me you have buyer’s remorse already, Sean! What happened to Trump crushing Hillary in those debates?!

Secondly, the naming of Romney, Bush and Cruz is particular pathetic. Trump viciously and inaccurately attacked all three of them on numerous occasions and even went after family members of Bush and Cruz in crazy fashion.

That’s fine if you want to win a primary that way, but you don’t then get to expect to get someone’s full support once the general election starts (no matter who the opponent is). If Trump really wanted their backing (he has claimed he doesn’t want or need it) then he should have thought about that before he went way beyond normal political attacks, even after he won the nomination. You simply don’t get to have it both ways.

Thirdly is the insanity of the notion that when Trump loses it will be because of a lack of support from conservative leaders. Forgetting that Trump is an obviously unqualified liberal who did nothing to earn their endorsement (and, again, said he didn’t want or need it), this is completely irrational.

How in the world could conservative leaders who showed themselves completely impotent to impact a GOP primary, ever possibly decide a general election which currently doesn’t look like it will be close? If they couldn’t stop Trump from winning among Republican voters, how can they be responsible if he loses among a FAR larger pool of voters, the vast majority of whom don’t care at all about what they say?

The reality is that in presidential elections, as 2008 & 2012 showed, this is a Democrat leaning country and the Electoral College makes it even more difficult for a Republican to win (though, it should be pointed out that this year there won’t be an actual Republican running). Assuming Trump loses, there is no evidence to suggest that it will be because he didn’t get enough Republican votes. It will be because the entire concept that Trump and Hannity sold to GOP primary voters that he could appeal to Democrats and Independents, while Hillary would be easy to beat, was an obvious myth. In my view, there is no election to “sabotage,” because it was forfeited the moment Trump was nominated.

But none of this was nearly as bizarre as when Hannity brought on Trump super fan Laura Ingraham. After his rant, Hannity went to Ingraham for the classic TV talk host device of “here’s a guest who agrees with me on to tell me how right I am.” Ingraham proceeded to utter what is now the leader in the clubhouse for the most asinine thing a (once) respected conservative has said about Trump:

“If you call yourself a conservative and a Republican, it’s actually immoral not to vote for Donald Trump.”

Let that one sink in for a moment.

We conservatives are now being lectured that if we don’t vote for a guy who has at one time held nearly every liberal position there is, is professionally and temperamentally unqualified for the job, gave Hillary lots of money and praised her even after Benghazi, and consulted with Bill Clinton just before he entered the race, we are IMMORAL?!

We have officially left the gravitational pull of the rational earth. This reminds me of a black leader claiming that blacks had a moral obligation support O.J. Simpson in his murder trial (when O.J. wasn’t really even “black” and he certainly didn’t deserve to win).

Of course what is really happening is that Hannity and Ingraham know that they picked the wrong guy in the primaries (those ratings Trump provided rendered them intoxicated) and that it is they who are going to be responsible for whatever Hillary does in office. They are just getting a huge jump on trying to dupe the very same naïve customers they fooled into supporting Trump in the primaries, into believing it wasn’t really the fault of Trump, or his surrogates, that he lost.

Fortunately for them, based on what we have so far learned about Trump supporters, I like their chances of at least partly pulling this scam off.
—
John Ziegler is a nationally-syndicated radio talk show host and documentary filmmaker. You can follow him on Twitter at @ZigManFreud or email him at johnz@mediaite.com