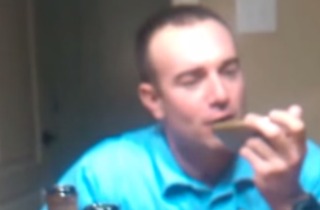 If you’ve checked SeaWorld’s Twitter feed in the past few months, you know that they tweet quite a lot about how misleading Blackfish was. The documentary goes into detail about SeaWorld’s treatment of orcas in captivity, which the park has, of course, completely refuted.

One of the people featured in the documentary is John Hargrove, an ex-SeaWorld trainer who has spoken out about the treatment of killer whales and released a book just weeks ago called Beneath the Surface: Killer Whales, SeaWorld, and the Truth Beyond Blackfish, revealing more about the park’s practices.

Well, SeaWorld is really going on the offensive against him, releasing a video to The Orlando Sentinel they claim to have discovered from an “internal whistleblower.” In the video, Hargrove is drunk and is talking on the phone to a woman about an incident in which apparently a group of black men threw a rock at her.

He drops the n-word several times, including asking, “You didn’t think it was a bad idea to ask these n*ggers to help you?”

A spokesman for SeaWorld denounced the “reprehensible” video, but Hargrove believes he knows what’s going on here:

“They’re going to pull out everything they can, drag up any dirt they can on me to make me look like this awful person. What’s so amazing, they’re not addressing the issues at hand. This is about killer whales in captivity.”