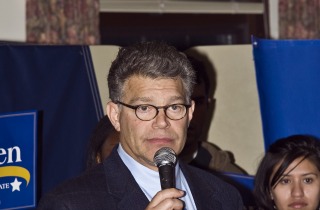 Before Al Franken became a United States Senator from Minnesota, he had a long career as a comedian (save for Stuart Saves His Family), an original writer on Saturday Night Live, and later as a political radio host on Air America.

During that time, and when he was writing books like Rush Limbaugh Is a Big Fat Liar and Lies and the Lying Liars Who Tell Them: A Fair and Balanced Look at the Right, Franken took some shots at his now-fellow senator John McCain‘s military service. He also made one joke in a 2000 Salon.com essay just as presidential election season started picking up steam. Here’s the remark:

“I have tremendous respect for McCain but I don’t buy the war hero thing. Anybody can be captured. I thought the idea was to capture them. As far as I’m concerned he sat out the war.”

Before everyone suggests Franken need to apologize just like Donald Trump should, here’s why this is different: Back in 2000, Franken was not a political figure. He wasn’t a sitting anything or a candidate for anything; the closest he came to political officialdom was as a revered satirist. More importantly, he even re-told the joke to McCain’s face in 2004, when the senator was on Franken’s own radio show.

Here’s how Franken’s spokesperson commented on the joke:

“It was a joke,” said Franken spokesman Michael Dale-Stein, “one that Sen. Franken told Sen. McCain when he was a guest on Sen. Franken’s radio show in 2004, during which he also called Sen. McCain a hero with tremendous political courage.”

The fact that a statement came so quickly from Franken’s office demonstrates that he is well-aware it is a terrible thing to say about McCain.

On the other hand, Trump is not just not apologizing, he’s doubling down. Because he knows we’ll all keep writing about it.

But hey — we all need a good clown, even if unintentional. It’s a long presidential race.